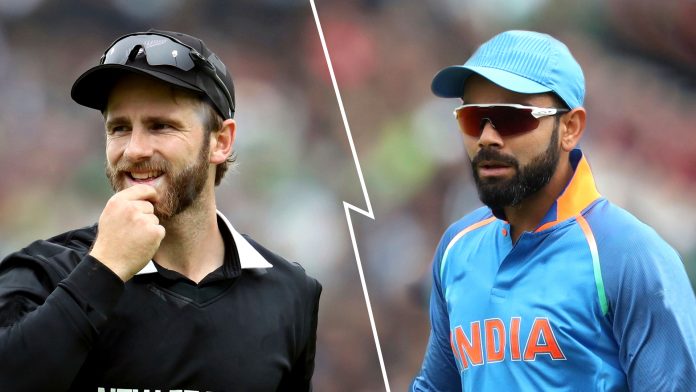 However, the league stage game between India and New Zealand in this tournament was abandoned due to rain, the only washed out game for both the teams.

The Old Trafford pitch is good for batting. The previous matches played at this venue were high scoring. But due to overcast conditions that are predicted for the game, pacers will get some movement. The team winning the toss might opt to bat first because this is a high-pressure game and the teams will avoid chasing.

The World Cup 2019 first semifinals are expected to be interrupted by rain because reports suggest Tuesday’s weather to be cloudy and overcast with the possibility of light rain showers. The temperature will be nearly about 19 degrees Celsius, and humidity will hover around 78%.

If this match gets abandoned by rain, then the live action will resume the next day, i.e. on Wednesday.

The Indian team will come with good confidence as they have finished the league stage at the top spot. Despite the defeat against England, Virat Kohli led side has emerged victorious on every occasion they took the field in this World Cup. Rohit Sharma has been in supreme form in this tournament as he already became the only batsman to score five centuries in a single World Cup, including three in a row. Apart from him, Lokesh Rahul has taken over the responsibility brilliantly, and Virat Kohli, as usual, has played some classy innings.

Mohammad Shami is expected to replace Bhuvneshwar Kumar who hasn’t looked in any rhythm so far. Apart from this, Yuzvendra Chahal will most probably make it to playing XI in place of Dinesh Karthik.

Kane Williamson will be considering him as the luckiest man on the planet because even after three straight defeats at the end of the league stage, his team qualified for the semi-finals. The 2015 World Cup runners up must have forgotten what happened in the past and will be now eyeing to give their hundred percent on the field to provide themselves with a chance to board the Lord's flight.

The blackcaps batting is too much dependent on their skipper, Kane Williamson, who has done bulk of scoring for them in the tournament. But in a do or die match, the other batsman needs to step in and make an impact.

Matt Henry is expected to replace Tim Southee who gave away plenty runs in the last match. Other than this, New Zealand might go back to Colin Munro instead of Henry Nicholls to open the innings with Martin Guptill.

Key battles within the game

India and New Zealand have played against each other in a warm-up game before the start of the actual World Cup 2019, and the Kiwis emerged victorious in the match. But, the situation is entirely different now as this is the semi-final. Let’s see what happens.

Till then, follow MyTeam11 for the latest sports stuff, news and predictions.