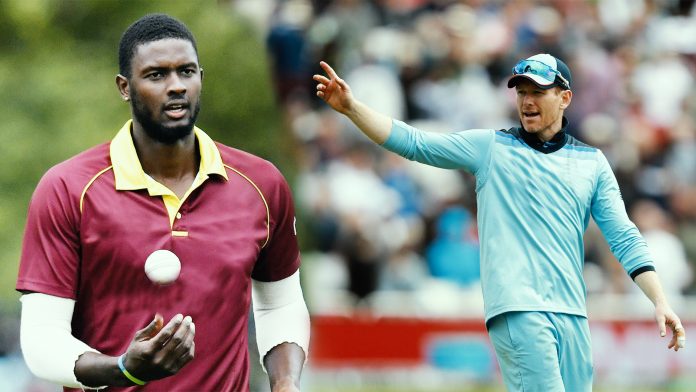 The Englishmen have bagged two wins in the three matches they have played in this tournament yet. In the tournament opener, they registered a comprehensive victory against mighty South Africa at the Oval. However, in the second match against Pakistan, the hosts faced an imminent defeat by 14 runs. But it didn’t affect the team’s confidence as England outplayed Bangladesh by 106 runs in their third match of the tournament.

On the other hand, West Indies kick-started their World Cup 2019 campaign with an extraordinary performance against Pakistan at the Trent Bridge, Nottingham. But, they lost the second match against the five times champions, Australia followed by an abandoned game against South Africa at Rose Bowl Cricket ground.

The Hampshire track is a paradise for batsmen as it offers excellent support with a flat track. However, bowlers will also get some help due to the overcast conditions expected during the match.

The pitch will play in the same manner for the entire match so, toss won’t be an issue. The decision will entirely depend on the captains of the team.

Rain might be a spoiler tomorrow as Hampshire is expected to cover with clouds for the entire day. The temperature is going to be nearly 17 °C, and the humidity will be in the mid-80s.

England’s most destructive batsman, Jos Buttler, looked in pain against Bangladesh. The reports are suggesting that he will recover for this match. Other than him, no injury concern is revolving around the team. Jason Roy played an outstanding knock against Bangladesh and will be eyeing to repeat the same. The team might not do any changes in their playing XI.

His opening partner, Jonny Bairstow yet haven’t showcased what he is known for and will be desperate to make an impact. Liam Plunkett and Mark Wood will be the key bowlers for England in the match.

Talking about West Indies, Andre Russell might again miss the match following injury. Other than him, no injury concerns are revolving around the team. No Changes are expected in the playing XI.

Chris Gayle and Shimron Hetmyer will be the key left-handers for the team in the match. The pace guns, Oshane Thomas and Kemar Roach, can be destructive with their pace and bounce.

Comparing the previous six meetings of the teams in the World Cup tournament, England is leading with a 5-1 margin.

Due to the presence of some blistering players in both the squads, this will be an exciting clash to watch out for. Let’s see what happens when both the teams take the field against each other.

Till then, follow MyTeam11 for more updates and information about the upcoming fixtures and the latest Sports stuff.