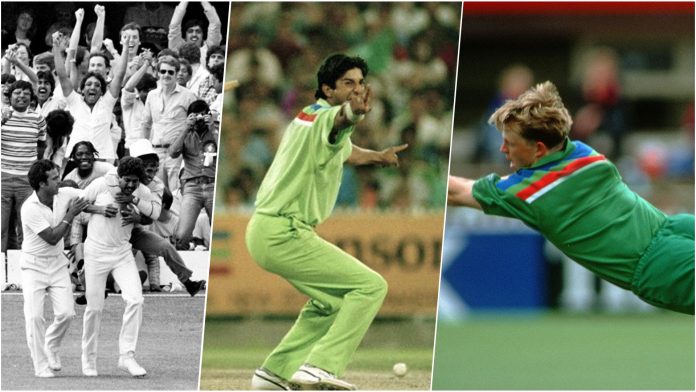 It was 1992 when South Africa played their first World Cup tournament. In a match against Pakistan in the same World Cup, while batting first, Imran Khan led Pakistan restricted the Proteas to 211 runs. Pakistan started the chase confidently before the rain interruption took place. Soon after the rain finished, the asking-rate of 4.9 in 28 overs suddenly became 8.5 in 14 overs.

When the match resumed after rain, Pakistan’s skipper Imran Khan and right-handed batsman, Inzamam-ul-Haq, started playing attacking cricket to meet the required run rate. Both of them added crucial 85 runs for the third wicket. Then came the moment that changed the entire match.

In the 31st over of the match, Inzamam-ul-Haq tried to steal a single of leg bye, Imran Khan on the non-striker end, denied to take the run and shouted “No.” When Inzamam tried to get back to the crease, he saw Jonty Rhodes sprinting towards the stumps from deep backward point. With the ball in his right hand, Jonty threw himself to the stump with his feet in the air to run out dangerous looking Inzamam-ul-Haq.

In the end, Pakistan lost the match by 20 runs.

Playing against West Indies in the 1983 World Cup finals, the Indian team was restricted to 183 runs while batting first. Clive Lloyd led West Indies looked favorites to win the match and lift the World Cup trophy for the third time. Sir Viv Richards along with Desmond Haynes, was taking the game away and then came the game-changing moment.

It was Madan Lal’s over where Sir Viv Richards miscued one ball that went high in the air, but it possibly looked that no Indian fielder would manage to take the catch.

But, Indian skipper, Kapil Dev who was fielding at mid-on ran towards the ball and took a mind-blowing catch that changed the complexion of the match. This catch was the perfect example of athleticism and coolness under pressure.

After this, West Indies panicked and kept losing wickets at regular intervals and fell short by 43 runs. Hence, Kapil Dev and co. lifted their maiden World Cup title in 1983.

Pakistan’s journey in the 1992 World Cup was not comfortable. In its first five matches, Imran Khan led Pakistan lost three games. The team lost to West Indies at MCG, to India in Sydney and South Africa in Brisbane.

But, after registering a victory against Australia and Sri Lanka, things started to change for Pakistan and due to a brilliant performance in their next matches, the team managed to reach the finals.

Playing against England in the finals, Pakistan skipper Imran Khan won the toss and decided to bat first. However, the team managed to post only 249 runs on the board. Although Pakistan bowlers bowled brilliantly and showed four English batsmen the Pavilion way at the score of 69. Allan Lamb and Neil Fairbrother stiched 72 runs in 14 overs that kept England in the match.

Following this partnership, Imran Khan threw the ball to Wasim Akram who had already bowled some magical spell in the then World Cup.

In the 35th over of the England innings, the left-handed bowler, Wasim Akram bowled two unplayable deliveries which are still in the minds of fans all around the World. He dismissed Allan Lamb and Chris Lewis in successive deliveries that proved to be significant for his team at the end. Pakistan lifted their first World Cup trophy after defeating England in that match.