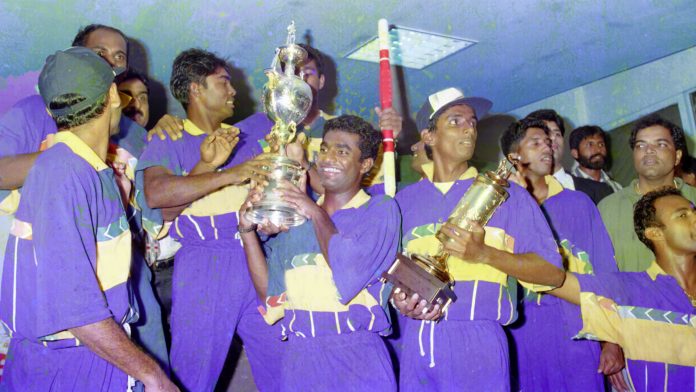 ITC’s Wills brand sponsored the 1996 World Cup, the sixth World Cup championship organized by the International Cricket Council. Three Asian countries, India, Pakistan, and Sri Lanka, were the hosts for this season. The crucial change bought by the ICC was the introduction of three new teams, Kenya, UAE, and the Netherlands. This time, Sri Lanka became the third team from Asia to lift the World Cup title. The previous two were India and Pakistan.

The grand finale took place between the 1987 World Cup winners, Australia, and the underdogs, Sri Lanka. Batting first, Australia posted 241 runs on the board, and the Sri Lankan team comfortably chased the target with almost four overs left in hand, thanks to Aravinda de Silva‘s sensational knock of 107 runs.

Total 12 teams fought with their warriors in the tournament to take the pride with them. These were divided into two groups- Group A and Group B.

The top four teams from each group qualified for the quarter finals. Sri Lanka, Australia, West Indies, and India qualified from Group A while from Group B it was South Africa, Pakistan, New Zealand, and England.

The first quarter-final was played between the 1992 runners up England and unpredictable Sri Lanka.

Arch-Rivals, India, and Pakistan clashed against each other in the second quarter-final.

Result– India emerged victorious by 39 runs to take over Sri Lanka in the semi-final.

Two-time champions, West Indies, took over mighty South Africa in the third quarter-final of the tournament.

In the last quarter-final match, Australia and New Zealand took over each other

Result– Australia defeated the blackcaps comfortably by six wickets and registered themselves among the top four teams of the tournament.

In the first semi-final, due to crowd disturbance match referee decided to award the match to Sri Lanka. This incident has never happened in international cricket.

In the second semi-final, two most successful teams of that era, Australia and West Indies took over each other where Australia emerged victorious by five runs to face Sri Lanka in the Grand Finale.