World Cup Flashback: Let’s turn pages and go back to the 1987 World Cup 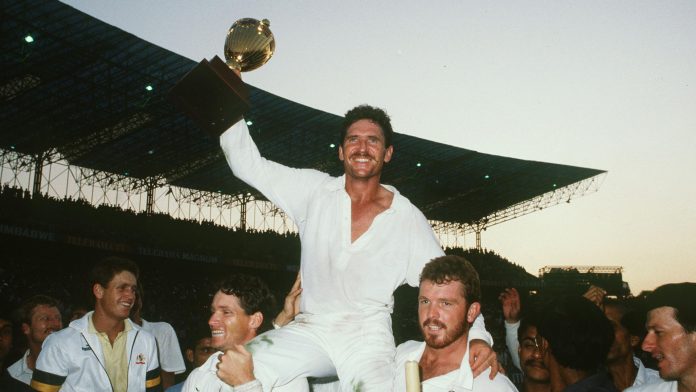 The fourth edition of World Cup was sponsored by Reliance and unlike previous three World Cup, this time India and Pakistan were the host countries. This was the first tournament to be held outside England. This time, the Australian team showed dominance in the tournament to be crowned as champions. Australia defeated England in the finals by 7 runs to lift their maiden World Cup trophy.

In the finals, batting first Australia made 253 runs in their innings. England chasing the target of 254 runs, managed to get to only 246 runs, therefore losing the match by 7 runs. The tournament lasted for one month i.e. from October 8 to November 8, 1987.

Like the previous editions, total eight teams were a part of the tournament divided into two groups. But, this time no new team made their debut. The eight teams that participated were Australia, England, New Zealand, England, Sri Lanka, Pakistan, West Indies and India.

Defending Champions, India and unpredictable Australia topped in group A to make it to the semi-finals. However, from group B, England and Pakistan qualified for the semi-finals. Australia defeated Pakistan in the first semi-finals while England ended team India’s dream of retaining the trophy after defeating them in the second semi-finals.

If you want more updates and information about Cricket World Cup, then stay tuned to MyTeam11