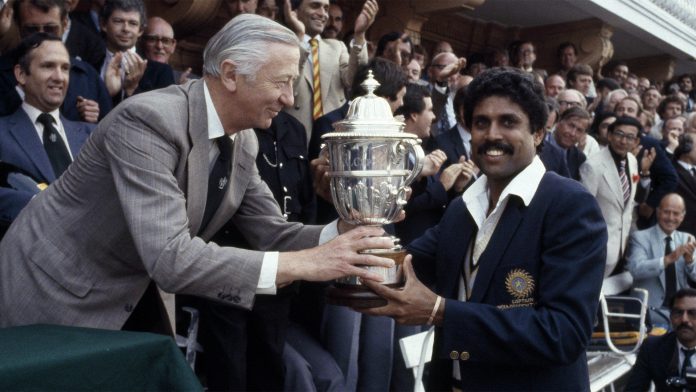 The 3rd edition of World Cup held in 1983 marked the ending of two time champions, West Indies’ World Cup winning streak. Like the year 1975 and 1979, the Clive Llyod led West Indies once again reached the finals with the aim to retain the World Cup title for the third time. But Kapil Dev’s Indian team faded their dream after beating them in the finals. Indian team arrived in the tournament without any hopes, but ended it as the second nation to lift the World Cup title. Before this achievement, Indian team had won only 17 One-Day internationals in the previous nine years.

In the finals, after Indian team was bowled out at 183 runs, it looked that West Indies will easily get to the target. But, Indian skipper, Kapil Dev‘s prolific running catch developed a spark in Indian players as a result of which Indian team stopped the strong West Indies team at 140 runs.

Like previous two seasons, once again England hosted the World Cup. Total eight teams were a part of this World Cup. But this time Canada was not part of the championship chase and instead the Zimbabwe cricket team made its debut in World Cup. Australia, England, New Zealand, England, Sri Lanka, Pakistan, West Indies and India were the eight teams of this championship. These teams were divided into two groups- Group A and Group B.

If you want more updates and information about the latest happenings in the Sports World, then stay tuned to MyTeam11.