World Cup Flashback: Let’s go back into history and relive the memories of the 1992 World Cup 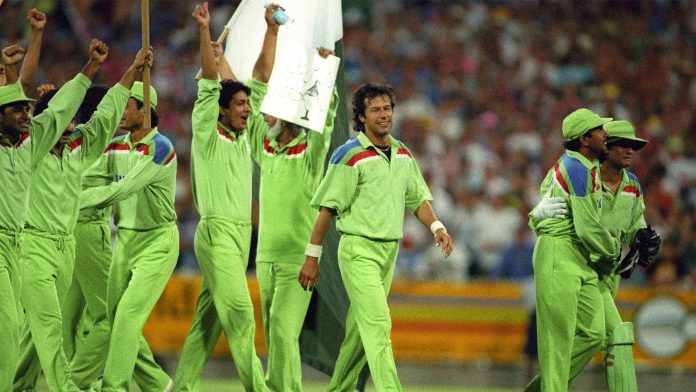 Benson & Hedges sponsored the 1992 World Cup, hosted by Australia and New Zealand. Like the previous four World Cups, this tournament achieved great success. It was the fifth staging for the World Cup organized by ICC that witnessed the introduction of colored clothing, white ball and day-night matches in World Cup. At that point in time, Pakistan team showcased exceptional performance and didn’t buckle down in pressure situation, as a result of which they emerged victorious and bagged their maiden World Cup title.

Playing the final against England, who were the runner up of the last World Cup (1987) at Melbourne cricket stadium, Pakistan team under the leadership of Imran Khan defeated them by 22 runs. Batting first, Pakistan scored 249 runs in their 50 overs, thanks to the skipper Imran Khan’s sensational knock of 72 runs. In response, England team once again staggered like it did in 1987 final and was bowled out at 227 runs, hence, losing the match by 22 runs. The tournament started from February 22 and lasted till March 22.

ICC introduced a change in the format for this tournament. During that time, the teams participating were not divided into any groups; round-robin format was introduced in which all the teams played against each other and the top four teams with most points qualified for the semi-finals. Pakistan, South Africa, England, and New Zealand were the four semi-finalists of the tournament.

The first semi-final was played between Pakistan and New Zealand, where Pakistan defeated the blackcaps by four wickets. However, in the second semi-final played between South Africa and England, heavy rains saved England and opened the door for the team in the finals.