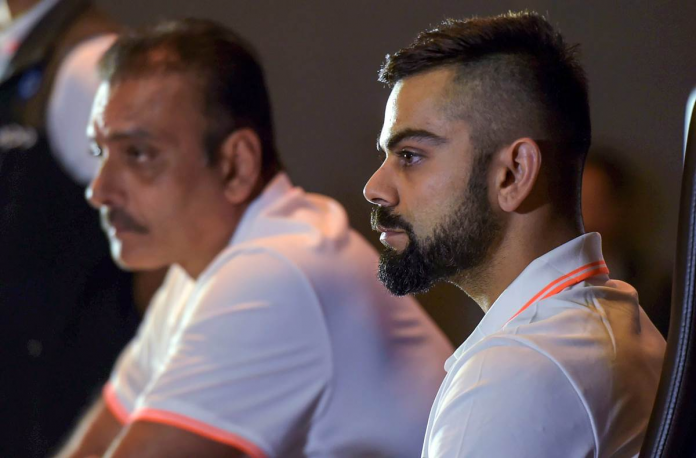 Before leaving for England for World Cup 2019 that is scheduled to begin from 30th May 2019, Virat Kohli and Indian team head coach, Ravi Shastri, conducted a press conference.

The fulcrum of the Indian batting line-up, Virat Kohli, will be leading the team for the first time in World Cup. Addressing the media, he said, “To be honest, this will be most challenging World Cup I have been the part of. All the teams have good players in the squad who have the ability to turn the game at any time against any team.” Adding on to this, he said,” Any team can upset any team in this tournament if you look at Afghanistan team, then as compared to 2015, they have improved a lot.”

Virat Kohli will play an indispensable role for the Indian team in the upcoming World Cup. In the past few years, he has been a go-to man for the Indian team in every format of the game. If we talk about his One-Day Internationals career, then he is currently ruling the world. He has already surpassed many legends like Ricky Ponting, Kumar Sangakkara and many more. Now, only ‘the God of Cricket,’ Sachin Tendulkar, is ahead of him.

Team India’s head coach, Ravi Shastri, said, “Our team has good players and if we will play with our full potential then, then we can lift the trophy for the third time.” He further added that every player in the squad is experienced and we have achieved a lot with this team.

The experience of MS Dhoni, Rohit Sharma, Shikhar Dhawan and Virat Kohli will play a crucial role in the batting department. As far as bowling is concerned, Jasprit Bumrah, Mohammad Shami and Bhuvneshwar Kumar, are all set to display their best bowling performances.

Virat Kohli ended the conference by saying, “Without thinking about the opposition, we have to be fully prepared for each and every match, we will play in the tournament.”

India will start its World Cup campaign against South Africa on 5th June. Before that, the team will play two warm-up matches against New Zealand and Bangladesh to get familiar with the existing conditions.