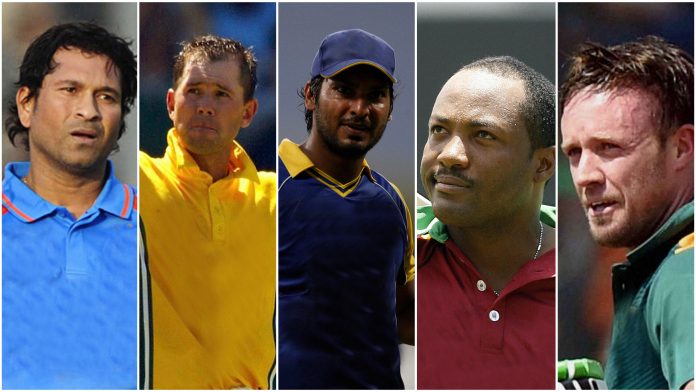 The little master, Sachin Tendulkar, is always there in talks when the cricket record book opens up. Although he played his last World Cup in 2011 when the Indian team lifted the cup, still he is at the top in the list of the leading run-scorers of the World Cup. From 1992 to 2011, he had played six World Cups, i.e., the maximum number of World Cups played by any cricketer in the history. In his six appearances in the World Cup, he had played total 45 matches in which he scored 2278 runs, with 15 half-centuries and six centuries. Apart from this, he received the ‘Man of the Tournament’ award in 2003 World Cup even when India lost in the finals to Australia.

Ricky Ponting, the Australian legend under whose captaincy his team lifted the World Cup twice in the year 2003 and 2007, is the second leading run scorer in the World Cup history. From 1996 to 2011, he has been a part of Australian World Cup team five times. During that period, he played 46 world cup matches in which he scored 1743 runs with the help of 6 half-centuries and five centuries. He holds the record of playing the most World Cup matches.

Sri Lankan great Kumar Sangakkara, who is considered one of the best left-handed batsmen that the game has ever witnessed, is the third highest run-getter in the World Cup tournaments. Former Sri Lankan skipper, Kumar Sangakkara, made his World Cup debut in 2003. From 2003 to 2015 World Cup, he had played 37 matches for his nation in which he scored 1532 runs, earning remarkable 7 half-centuries and five centuries. In World Cup 2015, he scored four back-to-back tons, and became the first player to achieve that milestone in World Cup ever. Under his captaincy, the Sri Lankan team made it to the finals of 2011 World Cup.

The legendary West Indies left-handed batsman, Brain Charles Lara, is regarded as one of the greatest batsmen of all time. From 1992 to 2007, the former West Indies skipper had played 34 World Cup matches in which he scored 1225 runs with the help of 7 half-centuries and two centuries.

Known for his extraordinary skills and talent to hit the cricket ball to any part of the ground against any bowler, the former South African captain, AB De Villiers, holds the fifth position. Popularly known as Mr. 360, he has the best batting average in the World Cup. From 2007 to 2015, he has been a part of South African team for 23 matches in which he scored 1207 runs hitting the smashing six half-centuries and four centuries. Besides, he is the fastest batsman to reach 150 in the World cup (162 runs off 66 balls). He created this record against West Indies in 2015 World Cup edition.