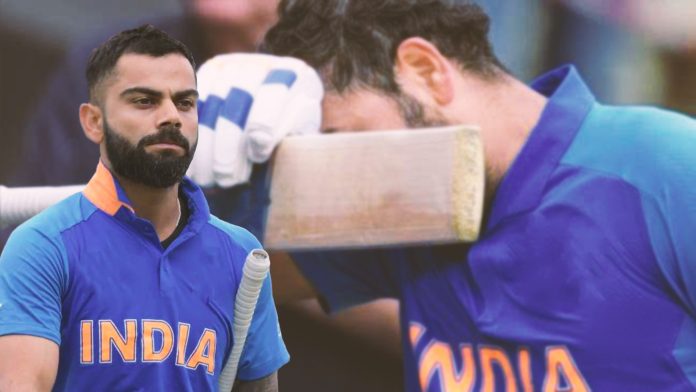 As always, after the initial destruction, there was one man whose presence on the pitch gave confidence and hope to billions of Indian fans that we can still do it. In what was his last World Cup innings, the legend MS Dhoni, tried his best and took the match so close to winning, but at the end, the dream ended just inches away for India.

The turning point of the match came in the second last over of the game. With 25 needed off ten balls and MS Dhoni on the crease, Indian team ‘s winning probability was more. But in the third ball of the second last over, Martin Guptill who failed to perform with the bat, became the Kiwis ‘hero. MS Dhoni tucked the ball to the on the side and attempted for a second run but fell short by just a few inches, courtesy to the brilliant throw by Martin Guptill that sealed the place in the finals for New Zealand.

While walking back to pavilion MS was captured crying that might ache the hearts of Indian cricket fans for a good amount of time.

Chasing the target of 240, the Indian team lost six wickets at the score of 92 runs. With the score of 92/6, India needed a miracle, and Ravindra Jadeja’s cameo brought India back in the match. With MS Dhoni tickling the ball, the left-handed all-rounder played his natural game and smashed sixes whenever he wanted. Ravindra Jadeja soon reached his half-century and celebrated it in his unique style.

MS Dhoni and Ravindra Jadeja brought up their hundred run stand, and with 42 needed off last four overs, the game was in India’s hand. But, an excellent over by Matt Henry, changed the complexion of the match. Following this excellent over, Jadeja miscued a good length delivery of Trent Boult that went high in the air and was caught by Kane Williamson. He must be thinking of this now as that was Trent Boult’s last over if he would have played him cautiously, then the things could have been different.

India’s top three batsmen were the talk of the town in the league stage of this tournament. In almost every match of this tournament, one of the top three batsmen have stepped in and took the team to victory. But, what happened in the semi-final was not expected as India got a horrible start to their chase. They lost Rohit Sharma, Virat Kohli, and KL Rahul within starting two overs at a score of five only.

The man with five centuries in this World Cup, Rohit Sharma was the first one to go after he was caught behind off Matt Henry ‘s late swinging delivery. New Zealand left-arm pacer, Trent Boult then trapped the chase Virat Kohli in front of stumps that made things complicated. Then soon, KL Rahul nicked behind the stumps off Henry that took shifted Indian team to back foot and decreased the winning probability.

Following this failure, Rishabh Pant and Hardik Pandya curbed their aggressive play, but both of them lost their patience against Mitchell Santner leaving all the Indian fans depressed.

But now, it’s all history the Indian team has played some exceptional cricket in the entire tournament and this match also, the team fought hard to take the things closer, but at the end, it was New Zealand’s day.