World Cup 2019: Four players to vouch for in the batting line-up 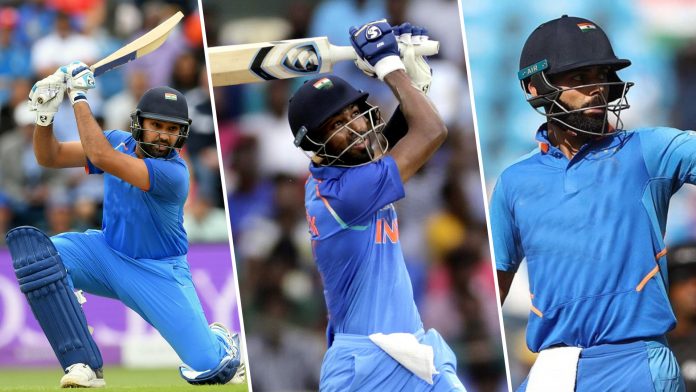 Since 2013, after being promoted up the order for opening the innings for India, Rohit Sharma’s game has elevated to another level. Till now, he has opened the innings 121 times in which he has scored 6043 runs. With 264 as the highest score, he is the only batsman to score three double centuries in the One Day Internationals. This will be his second appearance in the World Cup tournament. In World Cup 2015, he played 8 matches, in which he earned 337 runs with the highest score of 137 runs. He will be the ‘X-factor’ for the Indian team in the World Cup 2019 and he has to prove his efficiency with his swinging bat in the tournament.

The ‘Run Machine’ of India, who is on the verge of breaking Sachin Tendulkar’s One-Day International record of 49 centuries, will have a huge responsibility on his shoulders. In the past three years, due to his hard work and dedication, he has been on the top in the world and now has become the backbone of Indian batting line up. In total 227 one day matches that he has played yet, he has scored 10,843 runs at an average of nearly 60 runs. His ability to score runs consistently differentiates him from other batsmen.

Once his bat starts roaring, then it becomes extremely difficult to stop him.  This will be his third appearance in the World Cup, but he will be captaining the team for the first time. His captaincy record has been good; win percentage of approximately 74, will surely give him good confidence in the tournament. Apart from this, his energy and enthusiasm on the field will boost the other players to give their 100 percent on the field.

One of the most successful captains in the history of Team India, ‘Captain Cool’ will be a great support for the skipper, Virat Kohli, in the World Cup. His experience and exemplary potential to understand the situation will play a key role in the Indian team. He is regarded as the best finisher of the game, due to his extraordinary skills and calm behavior at the death overs of the innings.

He is considered one of the greatest players in modern times and most probably, this will be his last World Cup for India. With the likes of Rishabh Pant and Sanju Samson, he might retire after the tournament. He has already bagged the World Cup trophy for India under his captaincy and now, he would be looking forward to put a grand show in England with his incredible batting and wicket-keeping skills.

After IPL 2019, the 25-year-old all-rounder, Hardik Pandya, has become the most matured player among all. He has already proved this in the latest season of IPL and will continue to retain his impeccable form in the World Cup as well.  He will definitely be a comfort factor for the skipper, Virat Kohli, due to his all-round capabilities. He will be all set to make an indelible mark as he did in the 2017 Champions Trophy Finals, where he became the fastest batsman to score fifty in any ICC tournament finals.

So, these are the four players whose batting form will be very crucial for World Cup 2019. Therefore, the Indian team will hope to see these players bring sparkling performances and have positive effects on the match results.

Till then, follow MyTeam11 for more updates and information about the latest sports stuff.

Share
Facebook
Twitter
Previous articleWorld Cup 2019: Mohammad Amir and Wahab Raiz gets place in the Pakistan squad
Next articleWorld Cup Flashback: All you need to know about the first edition of World Cup held in 1975