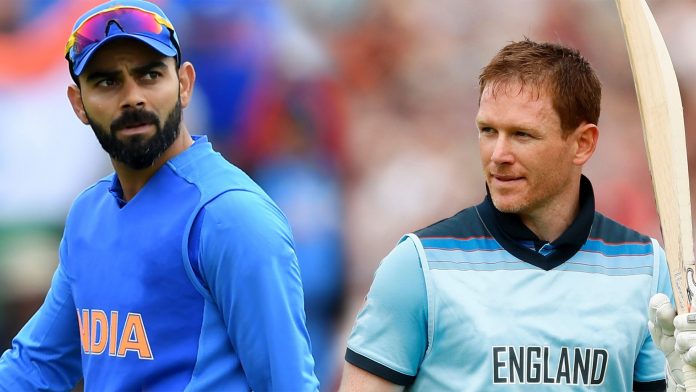 India is the only unbeaten team in this tournament while England has already lost three matches. So, this will be a must-win game for the Englishmen to keep their hopes alive for semi-finals race.

The pitch will be better to bat on than what we saw in the previous match here, but the spinners will get a good advantage in the second half of the match. So, there will be no surprise that captain winning the toss might opt to bat first and put a big score on the board.

Looking at the weather in Birmingham, the reports suggest rain interruptions might be there with the cloud cover of 48% throughout the match. The temperature will be approximately 22 degrees Celsius, and the humidity will be around 63%.

As the tournament is getting to end, the England team have struggled. After a dominating start in the competition, the English troops have lost the momentum completely. With four wins in seven matches, Eoin Morgan led side is at fourth spot in the points table and to make it to top four they have to win both their left games at any cost.

The English team management is confident that Jason Roy will be fit for the must-win the match against India. The final decision will be made until the morning of the game.

He will be replacing James Vince if he gets 100% fit. Other than this, no changes are expected for the match.

India is only unbeaten side in this tournament. Apart from one complete washed out match against New Zealand, the team has won all its matches. Currently, Indian team is at the second spot in the points table with five wins. Virat Kohli and Co. need one win in their left games to confirm its semifinal spot.

The Indian team has showcased some exceptional performance till now. Apart from Shikhar Dhawan and Bhuvneshwar Kumar who has been already ruled out of the tournament, no injury concerns are revolving around the team.

Talking about the team combination for this match, same 11 players that played against West Indies at the Old Trafford cricket ground are expected to play.

India is going to be the far more confident side going into this match, but England squad has some quality players who has the capability to turn the team's fortune.

Follow MyTeam11 for more updates and information about the upcoming fixtures and latest Sports stuff.