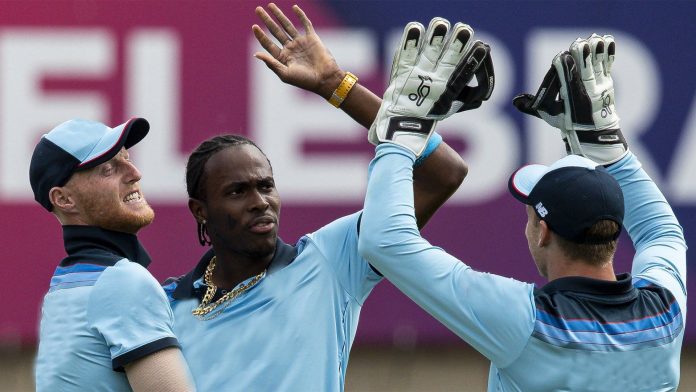 In the first match of the mega event played at London, the England team completely outplayed South Africa to become the first team to get 2 points and open their account in the points table. Before the starting of the match, the South African captain, Faf du Plessis won the toss and elected to bowl first. Even after sending Jonny Bairstow back to the pavilion in the first over of the innings, his decision backfired as England got to a huge total of 311 in their 50 overs. Jason Roy, Joe Root, Ben Stokes and skipper, Eoin Morgan played a pivotal role to help England reach the big total. All of them reached their half-century respectively with Ben Stokes getting the highest individual score of the match (89).

In spite of the brilliant batting display by England, the South African bowlers stood high in the gaming, keeping their will to win intact. Medium pacer, Lungi Ngidi picked up three wickets while the leg spinner, Imran Tahir and right-arm pacer, Kagiso Rabada took two wickets each.

Reacting to the chase, South Africa lost two big wickets in terms of Hashim Amla and Faf du Plessis within the powerplay overs. After this, due to a lack of experience in the middle order, the South African team collapsed and could not even play their 50 overs. In the 40th over of the innings, South Africa lost their last wicket at the score of 207 runs, thus lagging behind England’s total by 104 runs. Only Quinton de Kock and Rassie van der Dussen managed to cross the 50 run mark for the team which was not enough for the day.

Debutant Jofra Archer, bowled an extremely fiery spell to get three wickets and put the Proteas on backfoot from starting. All-rounder Ben Stokes, and medium pacer Liam Plunkett gave excellent support from the other side and bagged two wickets each.