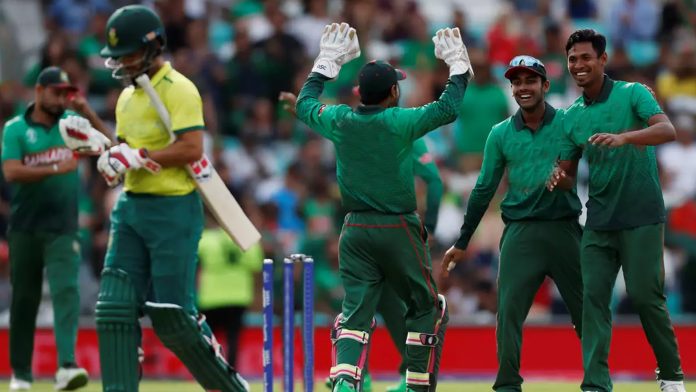 Bangladesh couldn’t have wanted more after the mind-blowing start they got in their first match of the World Cup 2019. Reaching to their highest one-day score of 330/6, the Bangladeshi Tigers showed some clinical performance on the field to defeat South Africa by 21 runs.

Before the start of the match, South African skipper, Faf du Plessis, won the toss and asked Bangladesh to bat. His decision backfired as the Bangladeshi batsmen took on the South African bowlers to reach their highest One-Day international score. The experienced duo, Shakib Al Hasan, and Mushfiqur Rahim laid the foundation for the team. All-rounder Shakib Al Hasan played a crafty innings of 75 runs while wicketkeeper-batsman, Mushfiqur Rahim went on to score brilliant 78 runs. After this, the middle order stepped up and utilized the platform set by the Shakib and Mushfiqur to take the team to command position. Mahmudullah played a dazzling knock (46*off 33 balls) while Mosaddek Hossain‘s 20 balls-26 runs also proved useful at the end.

Andile Phehlukwayo, Chris Morris and Imran Tahir took two wickets each, but none of the South African bowlers bowled an economical spell.

In an attempt to become the first team in World Cup history to chase a target of 331, at the end, Faf du Plessis led South Africa felt 21 runs short, hence, losing the consecutive second match of the tournament. Almost all the Proteas batsmen got a good start, but nobody could capitalize on that. Skipper Faf du Plessis was looking good before Mehidy Hasan clean bowled him at 62. JP Duminy, Aiden Markram, and Rassie van der Dussen reached 40’s, but didn’t convert that to big scores that could have helped South Africa to cross the line.

Bangladeshi left-arm pacer, Mushfiqur Rahim‘s 3 wickets and economical spell by Shakib Al Hasan and Mehidy Hasan wrapped up to a great victory for the team.

Man of the match