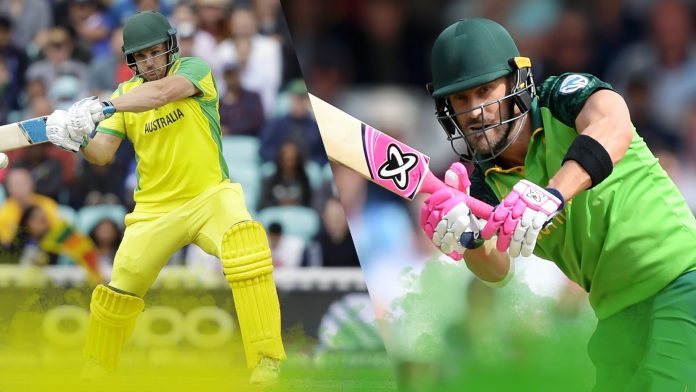 The ICC World Cup 2019 is inching closer to semi-finals, in the last league stage game, defending champions Australia will take on mighty South Africa aiming to retain the top spot.

In the previous games played at this venue, team batting second struggled to chase the total. Bowlers are expected to get a good advantage in the second half of the game. So, keeping this in mind, teams will opt to bat first after winning the toss.

Reports suggest minimal chances of rain to take place throughout the match. There might be some rain in the morning. The temperature will be 19 degrees Celsius which will come down to 13 degrees Celsius as the day progresses. The humidity will be on the higher side approximately in the mid-70s.

Aaron Finch led team is at the top spot in the points table with 14 points, and with a win in this match, they will finish the league stage at the same position. Apart from defeat against India, the Aussies have shown dominance over all other teams of the tournament.

Glenn Maxwell got injured during the net session, so the team management might give him rest for this match. Apart from him, Shaun Marsh has been already ruled out of the tournament due to a fractured arm. Peter Handscomb is included in the 15-member squad in place of him and is likely to replace Glenn Maxwell in the match against the Proteas.

Faf du Plessis and Co. didn’t live up the expectations in this tournament. The team has only managed to win two matches in this tournament so far. Now, the Proteas will be eyeing to end their World Cup 2019 campaign with a win and give their fans something to enjoy.

South Africa might play with the same squad that played against Sri Lanka in their last match. The team has performed well in the previous game and will be eyeing to repeat the same performance in this match.

Let’s see what happens in the upcoming face-off between the Kangaroos and the Proteas.

Till then, follow MyTeam11 for more updates and information about the upcoming fixtures and the latest happenings in the Sports World.