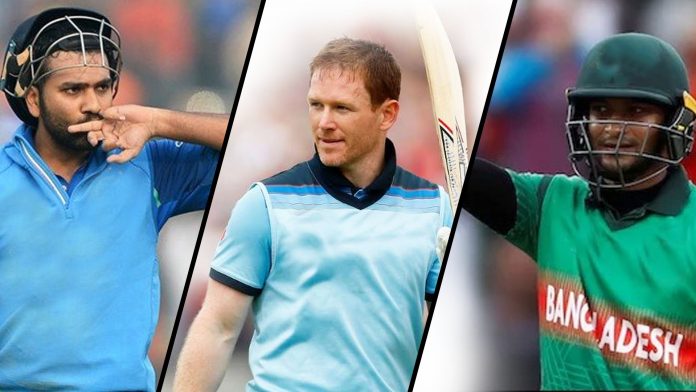 Cricket is one of the most celebrated game in the World, and the World Cup has witnessed some of the memorable performances over the years. The much-anticipated tournament organized every four years is always full of some exciting and dramatic cricketing action. In every World Cup players from different nations showcase some performances that dig up deep in the heart of fans.

Although the Indian team has been eliminated in the semi-finals the team’s performance has been tremendous throughout the league stage. All the players stepped in, but Rohit Sharma’s performance will last forever in the minds of cricket lovers. Due to his exceptional batting performance, he not only broke Sri Lankan legend, Kumar Sangakkara’s record but also equaled Sachin Tendulkar’s World Cup centuries record. The Indian opener wrote his name in the history books by becoming the first batsman to score five centuries in a single World Cup. He achieved this milestone in the team’s last league stage match in Leeds against the Lankan lions. Other four centuries came against South Africa, England, Bangladesh, and Pakistan, respectively.

Apart from this, he became the second Indian player after Sachin Tendulkar to go past 600 runs in a single World Cup edition with 648 runs.

The match against Afghanistan was Shami’s first in the World Cup, and with Bhuvneshwar Kumar injured, Shami was expected to play an important role, and he did the same that registered his name to the record books.

He dismissed Nabi, Aftab Alam, and Mujeeb Ur Rahman in successive deliveries to become the second Indian after Chetan Sharma to take a hat trick in a World Cup game. In this game, Mohammad Shami finished with four wickets for 40 runs off 9.5 overs. Chetan Sharma picked up a hat trick in the 1987 World Cup against New Zealand.

In the match against Afghanistan, England skipper Eoin Morgan smashed 17 sixes in his fiery knock of 148 runs in just 71 balls. After this innings, he has set a new World record of hitting 17 sixes in a single One-Day match. Previously, Rohit Sharma, AB de Villiers, and Chris Gayle shared this record with 16 sixes each in a single game.

Apart from this, he scored the fourth fastest hundred in the World Cup history.

Playing against arch-rivals Pakistan, Indian all-rounder Vijay Shankar left an everlasting impression in the hearts of Indian fans as he picked up his very first wicket in the first ball he bowled in the World Cup. Hence, becoming the first bowler to achieve this feat. Vijay Shankar took Imam-ul-Haq’s wicket with his very first delivery.

To add more to the fact, it was not even Vijay Shankar’s over. He was called on by Virat Kohli to bowl the remaining two balls of Bhuvneshwar Kumar who had to leave the field in the mid of his over due to an injury.

Shakib Al Hasan had showcased some spectacular performances in the World Cup 2019, where he bagged 606 runs in eight matches with the help of two centuries and five half-centuries. Apart from this brilliant batting display, the Bangladeshi star scalped ten wickets. Undoubtedly, we have seen the upgraded version of the all-rounder in this tournament. Moreover, he is among the three Bangladeshi players to score a century in the World Cup.

Amid his brilliant all-round performance in the tournament, he has become the fourth Bangladeshi player to get 6000 runs in One-Day Internationals.