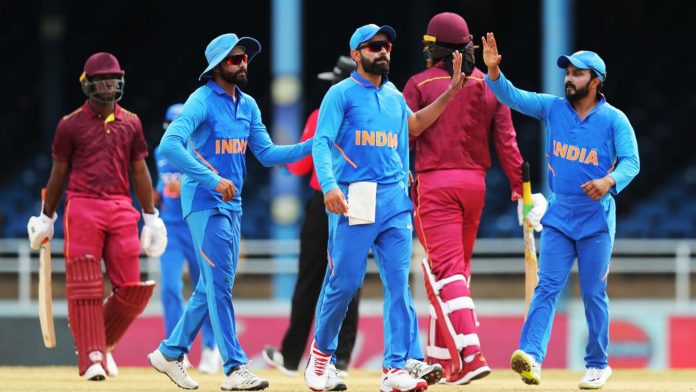 With rain intervening the game, the 3rd ODI of India’s tour to West Indies became quite a tug of war between the two sides. Revising the target to 255 in 35 over implying DLS method, the game demanded Men in Blue to deliver an action-packed performance, that they gave indeed. Virat Kohli and Shreyas Iyer became the primary reason behind India’s comfortable victory against the mighty Windies.

India was already 3-wickets down when Shreyas Iyer joined the leading man of the team, Virat Kohli, at the crease. The first wicket was after Rohit Sharma fell short of time and was made to move back to the pavilion after being run out. The second wicket came of Shikhar Dhawan who was caught out by Keemo Paul, after miscuing a short at the mid-off. Rishabh Pant became the third loss for the team, who was again caught out by Paul.

With an unstable start, the chances of achieving the target seemed lowering, but Virat Kohli & Shreyas Iyer roped in a magnificent partnership of 125 runs to make the situation stable for the team. Iyer hit a brilliant 65 off 41 balls comprising of 5 sixes before being caught at the long-off. On the other hand, captain Virat Kohli with his unbeaten 114 completed his 43rd ODI hundred, ending the game with his 14th boundary of the game.

Earlier in the game, the Caribbean Giants won the toss and opted to bat first. However, the decision didn’t look much of a benefit, as the hosts couldn’t keep up with the bowling of Indian bowlers, as wickets kept falling every couple of overs. The star sensation Chris Gayle, who was reportedly playing his last ODI outshined in the game and helping his side to reach a respectable total. He scored 72 runs off 41 balls laced with 8 boundaries and 5 maximums.

The game ended with India whitewashing the hosts to clinch the series by 2-0, Virat Kohli being announced as the Player of the Match and Player of the series for his remarkable contribution towards India’s success.

Stay tuned to MyTeam11 for the latest sports stuff, reports and match predictions.