Why Rahane Still Belongs to the Longer-format of Cricket? 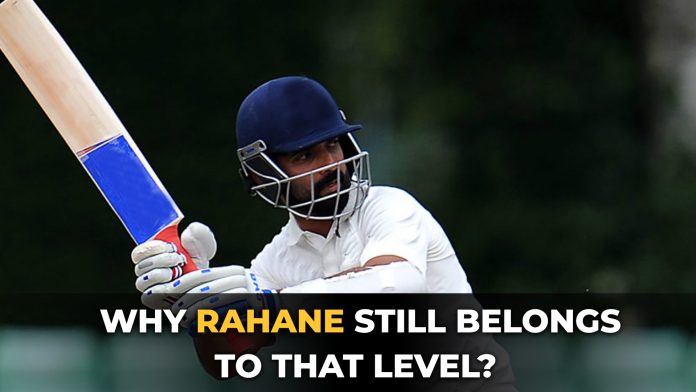 India’s one of the three Test pillars, Ajinkya Rahane once again made headlines during the 1st Test of India Tour to West Indies. Contributing 81 runs from the bat, the player helped Men in Blue achieve a respectable total, providing a stable position to the team.

Amid a lot of criticism for his performance that has been on a constant down-track for quite a long time now, the player is working hard to get back to those golden old days when there were applauses of appreciation and not comments of criticism. Through thick and thin, the player has managed to stand strong as one of the crucial pillars of the Indian Test team. To celebrate his contribution and to assure Rahane, we still believe in you¸ here are some reasons that will tell you why Rahane has a long way to go in the longer-format of the game.

Experienced Player that has seen seasons with the Team

Associated with the Indian cricket team since the year 2013, the player has been with the team through the fall and spring. Scoring 3488 runs in 95 Test innings at an average of 40.55, the player has faced different successors from each of the team. With a measurable amount of experience in hand, the player understands bowlers, their bowling style, pitch conditions and knows how to use the acquired information aptly.

Termed as a naturally talented player to whom the game like a piece of cake, Ajinkya Rahane has contributed well-enough to Team India’s success in the Tests format. Rahane is a calm and composed player who knows how to keep himself intact even under high pressure. The player is determined to playing easy shorts, taking his time to settle down & focuses on helping Team India clinch victory easily.

Knows How to Tackle Slip/Gully Fielding

Being recognized as the toughest fielding positions, the gully or the slip fielding positions play a quite dominant role in deciding the game’s fate. Rahul Dravid, the former best slip/ gully fielder of Team India when bid the final goodbye to cricket, it was Rahane who slowly stepped into his shoes with his exceptional fielding skills. He is an aid to the spinners of modern times, especially to Ashwin & Jadeja. Taking some brilliant catches in the home matches for India in the 2016/17 season, Rahane has become an impactful gully/slip fielder, finding a replacement for whom would be a tedious task.

Best for Spot No. 4 in the Team

Rahane believes in the saying, “slow and steady wins the race,” and thus, takes his own time to settle on the pitch. Batting at number 4, the player sports an excellent opportunity of helping the team build-up to a respectable total. Also, with Pant at 6, Ashwin at 7 & Jadeja at 8, he gets enough assurance that the team can carry on the boost provided by him, batting at number 3 or number 4.

Looking at Rahane’s overall Test career starting from the year 2016, it turns out that the player holds some impressive stats. Diving his career into two different parts, from 2013 to 2016 and from 2017 up till now, he has pulled off some fantastic scores in the former duration. Meanwhile, the latter part of his career has not been too good for him, but it seems that the player is getting back in form & will definitely be back with a bang.

Here were our justifications to tell why Rahane still belongs to the longer format of the game. If you have something to say about the Test legend, tell us in the comment section. Till then, stay tuned to MyTeam11 for all the latest sports stuff, match predictions, and reports.