Why is Messi so special? 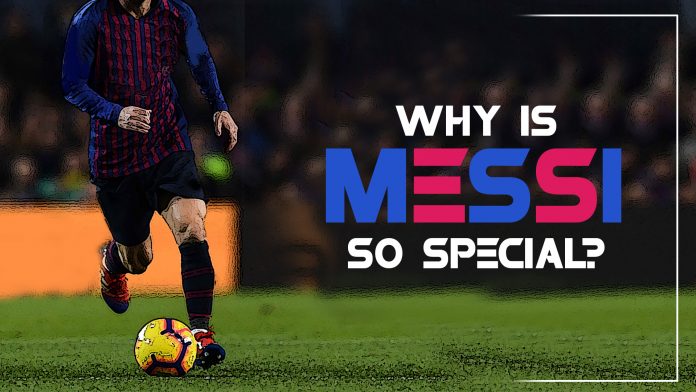 Messi! Messi! Messi! Here he goes with his magnetic foot, crosses the forwards, breaks the defense, shoots the ball on the top right corner of the goal … and it’s a goal! Nothing can stop Lionel Messi on a football ground, where he is the king and the master of the audience and the ball.

Messi has transformed an ordinary life into an extraordinary in spite of going through a lot of pain in his early life. He was born in Rosario, Argentina, on 24th June 1987, in a middle-class family. If today, you see him on the football field, he is one of the swiftest players on the field, with a dribbling ability that’s nothing short of magical. But you will be surprised to know that Messi in his young age, suffered from Growth Hormone Deficiency.

Messi as a Person

As a footballer, he is one of the greatest players ever born on this planet. He’s the only player with six best FIFA Men’s Player Awards, six European Golden Shoes, ten La Liga titles, four UEFA Champions League titles and many more.

Also Read: WHY INDIAN FOOTBALL FANS ROAR FOR RONALDO & MESSI BUT NO CHEERS FOR CHHETRI?

As a human being, Messi has always contributed towards society and the world. He donates millions so that he could make this planet a better place to live and is known to have helped thousands of children who suffer from deficiencies, as he also went through the same.

Messi has a wife and three children, and he loves spending time with them. He has a stronghold on every aspect of life and is an inspiration to the youngsters who feel that they are short, not good looking or not fit. Looking up to him inspires them that they too can achieve success through perseverance and dedication.

What does it take to be Messi?

After joining the youth system of Newell’s Old Boys, a club in Rosario, Messi, at the age of 13 flew to Spain to join FC Barcelona club. Not only he was enrolled in the club, but the club also took the responsibility to look after his medications. After the selections, Messi had nothing to say because his game speaks for him. His speed and his technique have landed him a large fan base, not just in America or Europe but all around the globe. He has scored 690 goals in his international career until now and is the highest-paid sportsperson in 2019.

Messi’s story is full of inspiration and motivation, where on one side, he is the greatest football player and on the other, a simple person who cares for people and family.