Why can India Win the Test Series Against West Indies? 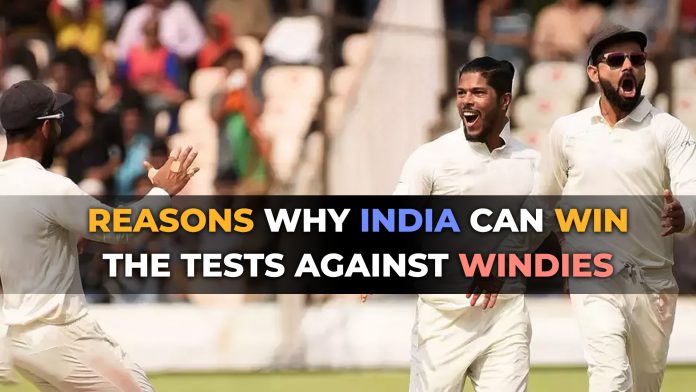 After clean-sweeping the hosts in T20Is and ODIs, the home team is now playing to make a mark in the ongoing Test series. Going strong by 108 runs ahead of the Caribbean Giants on Day 2 of 1st Test being held at Sir Vivian Richards Stadium, Antigua, team India is looking forward to another whitewash, grabbing the series 2-0.

Fighting back quite hard, Jason Holder and the team looks strong and determined to grab the series & ditch another whitewash. In short, the on-going Test series is a battle for pride for the hosts. However, the records, the stats, and the assumptions all point toward the upcoming victory of visitors. Here, we have covered up the reasons, as to why is India the more favorable team for winning the series.

With Pujara, Kohli and Rahane available at the rescue, the Men in Blue have an advantage over the West Indies. The trio is known for their terrific performance in the longer-format of the game & often adjudged as the reason behind India’s most of the Test victories. India can easily get the ball in their court if this batting trio stays put at the pitch & knock some decent scores off the bat.

The bowling duo that outlines India’s victory at most of the occasion is another trump card that India pull out and get the game in their favor. Showcasing a terrific performance in the World cup 2019, with 18 wickets in 9 matches at an average of 20.61, the Yorker King can bag easy wickets. On the other hand, Shami picked up 14 wickets in 4 matches; scalping two 4-wickets haul in the recently concluded World Cup.

Meanwhile, the Men in Blue are far-behind the Caribbean Giants in terms of head-to-head contests, the hosts of the ongoing India Tour to West Indies have never won a Test series against India since the year 2002. The victory that started with Ajit Wadekar’s captaincy took another 35 years to get on a constant track. It was after the Dravid-led team that toured West Indies during 2002 & won the Test series against the hosts after 35 years that there was no looking back. India has had the upper hand in the Tests held in the Caribbean ever since 2002.

Strong Position in the Longest-format of the Game

India is ranked as the number one team in ICC Test Team Rankings. Moreover, under the captaincy of Virat Kohli, the team’s position in the longer format of the game has been on a constant betterment. Virat Kohli undertook the reign of the team in the year 2016, and since then the Blue Army has won 23 Tests out 38 with a win-loss ratio of 2.875, considered to be the best amongst all the test playing nation. Virat Kohli is just one win away from equalizing MS Dhoni’s record of most wins as Indian Test captain and has a golden chance of achieving the feat by 2-0, that will make him the most successful Indian captain. The strong position of the team and Virat’s captaincy can help India win.

Sir Jadeja, the go-to channel for team India when a bewildering bowling performance is required to get the opponents to go weak in their knees. An all-round performance from one of the finest all-rounders of the current time will be a big requirement for the team.

Let’s see where the series is directed. Will Windies be able to save their pride or will India maintain their Tests winning streak. Sit back & see what the time holds in for the teams. Till then, stay tuned to MyTeam11 for all the latest sports stuff, match updates and predictions.