Who is Priyam Garg? – Know Everything About India U-19 Captain 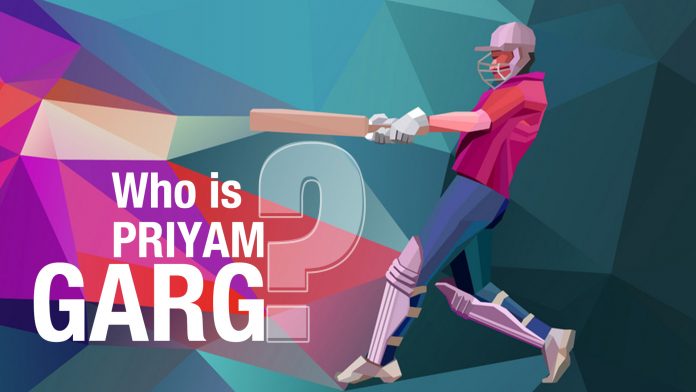 The announcement of India’s squad for the U-19 World Cup is doing the rounds and has given way to a major news in recent times. We all are well aware of the fact that Priyam Garg is going to lead the Indian team in the U-19 World Cup, but do we actually know who Priyam Garg is? DO we know what did he do to gain so much of popularity? Well, we think not many are familiar with the name and thus, here we are. Let’ talk know everything about the Indian U-19 Captain, that is all set to lead the team to their title defence.

Priyam, the upcoming Indian U-19 team captain was born and brought up in Parikshitgarh town of Meerut district in the state of Uttar Pradesh in the year 2000. The young lad was interested in playing cricket since the initial days of his child, but his family’s financial conditions were a big hurdle in his career. His father was selling milk from one house to another on his cycle, and they were struggling to make ends meet. But when destiny plays its magic even the worst situations turn in your favour. With constant appeals from neighbours, Priyam’s father met coach Sanjay Rastogi who identified the impeccable bowling talent of the player at once, and that is how Priyam’s journey of becoming one of the prominent players in the domestic cricket began.

“No matter how big your dreams are, you can always achieve them with hard work.” The saying holds cent per cent true in case of the young emerging talent, Priyam Garg. The player started playing cricket at the age of 8 years and got enrolled in a professional academy in the year 2009. The player’s cricketing journey witnessed a major setback in the year 2011 when he lost his mother in during long-prevailing illness, following which Garg stopped going to cricket academy, but his father became the source of immense strength for him. Priyam’s father made him join the cricket academy back following which he was selected in the U-14, U-16 and U-19 teams respectively. The right-handed batsman at the age of 19 years 2 days has been a part of various major teams including India Under-19s, Uttar Pradesh Under-14s, Uttar Pradesh Under-16s, Uttar Pradesh Under-19s.

Priyam made his first-class debut in the year 2018 playing for Uttar Pradesh against Goa in Kanpur. Since then the player has played 16 innings in 12 matches, scoring a tally of 867 runs at an average of 66.69. The highest scored knocked by the player in first-class cricket stands at 206 which came against Tripura. The player has hit a total of 2 centuries and 5 half-centuries in the first-class format.

Talking about the List A format of the game, then Garg has played 15 matches scoring a total of 539 runs in 15 innings comprising of 1 century and 3 half-centuries. The player holds a strike rate of 89.83 and an average of 41.46 in this format of the game with his highest total standing at 120 runs.

Garg’s magnificent performance in the List A cricket helped the player catch the attention of many. Media was going gaga over the player’s performances after he managed to 2 double tonnes in U-16s and U-19s. He was included in the Indian T20 League Auctions that held in December 2018 with a base price of ₹20 Lakhs. However, among the glitz and glamour of international players, he went unsold. Later on, he made his T20 debut for Uttar Pradesh against Maharashtra. He has played 11 matches scoring 227 with the highest score of unbeaten at 59.

In the coming times, he’ll be seen leading the India U-19 team to World Cup, and we believe that the player might shine just like other legends of international Indian team including Manish Pandey, Virat Kohli etc. We hope this embarks a successful journey for the player and opens the door to the international cricket world for him.