What Mayank Agarwal needs to be successful in West Indies conditions? 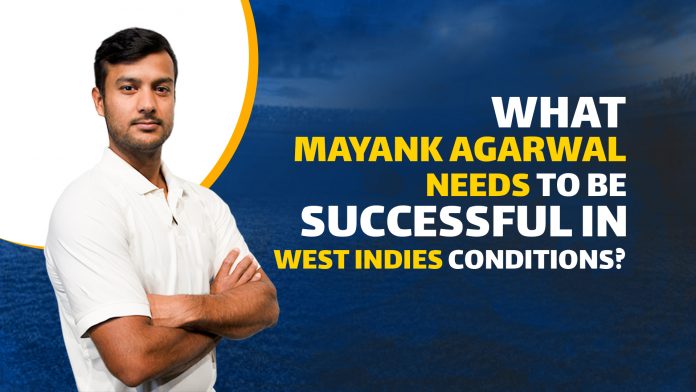 Even before India had started their preparations for ICC World Cup 2019, there were a few names in the air rolling around the ears for selection. The Indian team was struggling to stamp authority on the number four – and Mayank Agarwal was one of many names who were in the scheme of things. However, he wasn't named into the 15-member squad until opener Shikhar Dhawan suffered a thumb injury. But he didn’t get a game there and is yet to make his debut in limited-overs.

Similarly, in the Tests, he rushed to Australia as a replacement opener and walked into bat on the first day of the Boxing Day Test in Melbourne and in front of a packed stadium carved out a brilliant 76. Later, in the second innings, he was just as impressive in making a solid 42 even as wickets tumbled at the other end.

In the next Test, he made a cracking 77 to show that he was unfazed by the Aussie attack. His consistent performance against the top-quality side like Australia ensured that he belongs to the ultimate level of the game.

However, on the West Indies tour, he has looked all over the place and hasn’t been able to get his feet moving freely. In the first Test, he recorded scores of 5 and 16. To make the case worse, he scored 12 and 13 in the only practice game India played in the ongoing West Indies tour.

Going by his own set standards, he scores have been low and on top of that has looked demoralized.

In the past, Agarwal enjoyed his familiarity with the dynamics of the Indian dressing room. He firmly believed that he belongs in the big league and the fellow players, who have seen him handle the Australian pace and sledding with aplomb from close quarters, are just as comfortable with him.

So what’s been wrong in this series? Is he out of form or there’s something else troubling him? Can this all change by tinkering with stance or technique? – Well, these are the questions which Agarwal needs to introspect before he steps onto the ground for one final Test.

The healthy competitiveness in the Indian dressing room can well go against him if the bad patch continues for him a little longer. Going in the second Test, Mayank’s idea should be to play on the merit and forget the previous performances. If Agarwal can believe in his abilities, he is ought to do well.