What Indian team needs to do to play next FIFA World Cup? 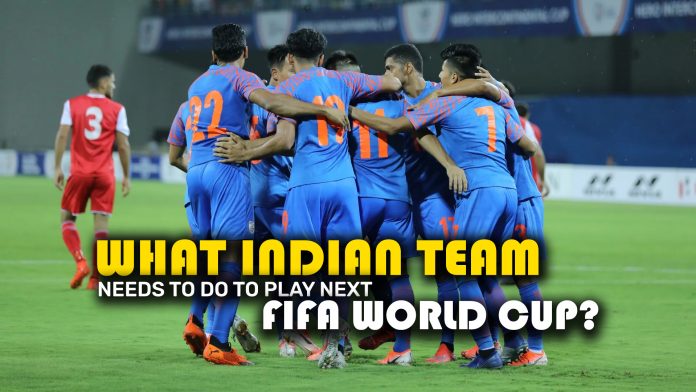 After Cricket creating a lot of buzz in India, the nation is now gearing up to get driven by the wave of football. With the Indian Nation Football team gearing up to book a slot in the upcoming FIFA 2022, the Indian fans are making all sort of preparations, from planning to bunk classes & offices to sitting tight in front of TV screens, to support their home team.

Football, known as the next big thing in India, is all set to bring the craze and love for the game from India, up & front on a global stage. India is all set to try its luck & make a place for itself in the global football championship, FIFA 2022. But just luck can definitely not earn India the position it is looking for. Thus, here we are with some expert suggestions from our analytics team about what does the Indian team need to do for building a place in the upcoming FIFA world cup. Read on to know.

India is presently placed at the 101 spot in the FIFA Rankings, and after the Kuala Lumpur draw, it is placed in a group with Qatar, Oman, Bangladesh, and Afghanistan. Out of all the opponents in the group placed along India, Bangladesh and Afghanistan are the weakest. India can register an easy triumph over Afghanistan which is placed 44 spots down India in the rankings table. However, Bangladesh is weak but should not be underestimated. India should strategize to register a comprehensive victory over their neighbors.

The biggest obstacle in India’s journey toward playing the FIFA world cup is two of its opponents. Placed in the group with AFC Asian Champions Qatar and the Gulf Champions Oman, the qualifying game can be a tough task for the Blue Army. Also, the campaign starts with India facing these two champions in the initial games. India can manage to pull off against Oman, but against Qatar, it is going to be a hell of a task. Thus, India needs to understand the weak points of the teams, & strategize accordingly to make a place for themselves in the team.

The Indian football team is home to various champions who are giving their heart and mind to the game. The current skipper Sunil Chhetri, Gurpreet Singh Sandhu, Narayan Das, etc. these are some of the professional football players that are a part of the Indian National Football team. Taking seasoned players, who have played various domestic and club matches since the start of their career, into consideration can prove to be a big positive. The experience of professional players will help the team acquire a strong position in the group stage against prominent opponents like Oman and Qatar.

The Croatian football manager is roped in to train the Indian football team for the FIFA world cup qualifiers. Having managed 6 teams previously, and with an 18-year-long experience as a player, Igor Stimac has a lot to teach. Learning from the experience of Stimac will be one of the important things that Team India will have to do. During his career as both a player and manager, Igor has been exposed to various football teams & his familiarity with international teams can help India achieve a significant spot in the FIFA world cup qualifiers.

The last on the list is audience support. Many of the football players are from the north-eastern states of India and the game still needs to get higher popularity levels in other parts of the country as compared to the north-eastern side. Love and support from the audience will help in motivating the team to a greater extent and boosting their confidence to a new high. Stability and confidence are the two pillars on which team India’s FIFA world cup qualification is based on. Thus, pick your placards, wear your jerseys and get ready to support the Indian national football team.

Indian Football Team is gearing up to make it big in front of the world. With FIFA 2022 fast approaching the excitement to play on a global level is increasing. Here we have told what the Indian team needs to do to qualify for FIFA 2022 world cup, but a lot is yet to be done on our part too. So, its time that we get ready to witness some football action and support the team with whole-heart. The results reaped will surely be sweet.