What Indian Cricketers would be as “FIRECRACKERS?” 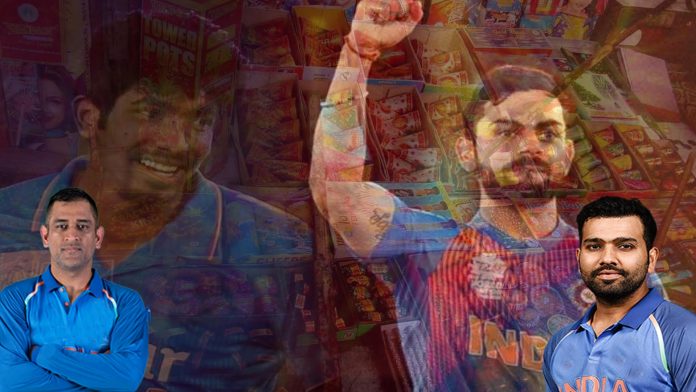 Diwali is round the corner and shopping through our list of “Patakhas,” the idea of comparing our “Men in Blue” with the Patakhas taking over the entire market. Players and their mind-boggling performances are easy to compare with firecrackers as both are known to create a Blast. Read on and know which Indian player resembles which firecracker.

Captain Cool as he was profusely known during his captaincy period, Dhoni is the perfectly matches the firecracker Flower Ganga Jamna Bomb. Just like the firecracker, the legend’s performance is all sparkling and glittery in the beginning but known for his finishing style, the player always ends his innings with a bang.

The team India captain, “Virat King Kohli” is always known for his aggressive on-field performance and breaking records. Recently, the player became the fastest human on the earth to 10,000 ODI runs. Taking the cricket world by storm with his hard-hitting batting performance the player ought to be regarded as the 10000 shells garland.

“Sharma Ji ka Beta,” you know. He is known for scoring double centuries like it is a cakewalk. Well, we guess it is for the player. Thus, he is the Sutli “Atom” Bomb, just like the firecracker the player is always up to create a thunderstorm leaving his mark with a banging sound on the spectators.

Shikhar Dhawan knows how to create magic on the field. One thing about the player that is needed to be mentioned is his consistency when he’s on the crease. The player’s innings is always soothing, sparkling and glittering. It gives you the feel of the occasion with maintaining the serenity of the atmosphere.

Ravindra Jadeja is just like the Bullet Bomb, or in an entirely desi tone we can say he’s the “Chhota Packet Bada Dhamaka.” The player is well aware of his capabilities and never fails to make use of his skills on the field. Once the player gets hold of the pitch gets ready for some big “Dhamaka.”

The right arm fast-medium bowler looks to be very well-behaved and easy to take over player due to his cool and calm attitude, but in reality, he is another version of our Dhamaka players. The player knows when and where to fly delivery and send the player on the crease back to the pavilion.

Well, this was our list of evergreen “Pathakhas,” that we would love to keep on seeing on the ground. We are sure the next time you will pick and a firecracker in the market you will remember our Indian player. MyTeam11 wishes everyone a very Happy Diwali, stay tuned for more sports updates.

Share
Facebook
Twitter
Previous articleVirat Kohli Birthday: What Legends think about the Fastest Man on earth to score 10,000
Next articleIND vs WI: Blue Army wraps the series with a 3-0 victory