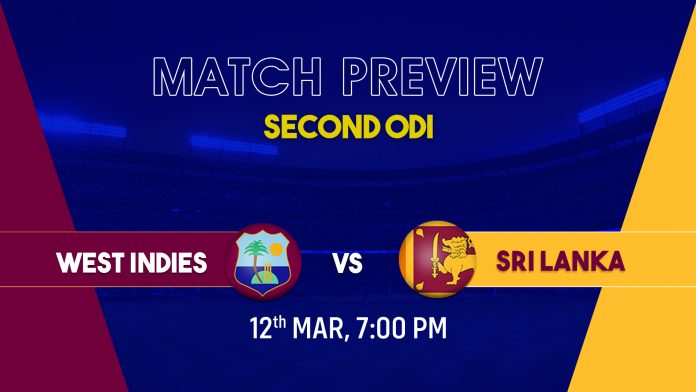 West Indies and Sri Lanka will face in the second match of the ODI series. West Indies have taken 1-0 lead in the series after winning the opening ODI by 8 wickets.

West Indies will take on Sri Lanka in the second ODI to wrap up the series. The hosts defeated the Lankan side with ease in opening ODI. Shai Hope continued his top form and scored 10th ODI hundred to become only 8th West Indian player to achieve this feat. His form since 2019 is not less than Virat Kohli and Rohit Sharma. He is doing wonders in ODI format. Sri Lanka were outplayed in all departments. They allowed West Indies to dominate after a prominent opening start. From 105/0, Sri Lanka bowled out on 232 which were chased by West Indies with losing just two wickets.

Evin Lewis also scored a half-century and openers added 143 runs for the first wicket. They have a good balance in batting. Sahi Hope and Bravo both are the best ODI players and play according to the conditions. The depth of the batting line relies on Holder and Allen, followed by Pollard. The Bowling unit has shown good performance and they have too many options. Pollard also bowled five overs in the last match and went for just 15. West Indies conceded easy 30 points to Bangladesh in the last series so they require more points to better their position in the points table.

Meanwhile, Sri Lanka made too many mistakes in last game. They got a fine partnership but they couldn’t avail this chance. Gunathilaka gifted the wicket when he was set. Ashen Bandara impressed with a fighting half-century in middle but 232 runs were not enough. The bowling unit made things tougher for Windies but they couldn’t produce wickets in the regular period. West Indies chased down the target with three overs spare. Sri Lanka cannot lose another series.

This is the first assignment for them in ICC’s CWC ODI Super League. It’s been a long time since they won an international series. The last ODI series win came against Bangladesh at home in 2019. Dimuth Karunaratne has to rebuild this team around the experience. The next ODI World Cup is in 2023 and will be played in the Indian sub-continent and last time, Sri Lanka were a finalist. They can be a good contender if they improve their mistake in the next two years. Sri Lanka can make a comeback to take the series into the decider.

Antigua’s this ground is good for batting and it allows batsmen to take full advantage of the surface. The track gets slower later the match progresses. It’s a track of 250-270 and chasing would be tricky here.