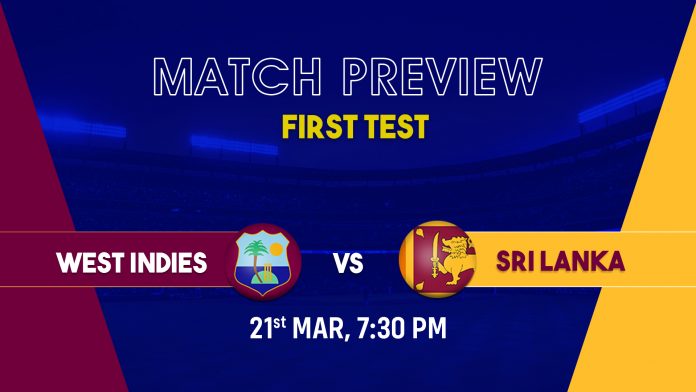 West Indies will take on Sri Lanka in their last World Test Championship assignment with the opening Test in Antigua. Both teams have been eliminated from the Championship.

World Test Championship 2019-21 got its two finalists India and New Zealand but its league-stage will still continue with the Sri Lanka-West Indies Test series. Both sides stand eliminated but they will look to end the championship high. Sri Lanka’s whole campaign in WTC 2019-21 is pretty disappointing. They started with a clinical victory against New Zealand and since then, they didn’t get a single victory. In the last two months, they lost four Test matches against South Africa and England. The home defeat against England portrays the dull story for the Lankan side. Under the new coach Arthur, Sri Lanka haven’t achieved yet. On this tour, they already lost the T20I and ODI series. They have just one win out of six games. Test success is far away from the Lankan side.

Dimuth Karunaratne will lead the side and they didn’t add much stability to the squad after the home series against England. Senior players Lahiru Thirimanne, Dinesh Chandimal, and Angelo Mathews will feature in the XI who will be the key figures for Lanka in the batting unit. Antigua’s surface can help spinners so Sri Lanka have that combination that can trouble West Indies. Dhananjaya de Silva and Lasith Embuldeniya are already two main spinners for them. Wanindu Hasaranga is currently the best in all-formats for Sri Lanka but he hasn’t played much with the red ball. Sri Lanka have that spark in their side but previous records put them behind in the favourites. They are sitting at the eighth position in WTC, only ahead of bottom side Bangladesh.

Meanwhile, West Indies will play their second home assignment in WTC after 2019 and they occupy the sixth position in Test Championship. West Indies have three wins in their WTC campaign and all three came at away venues. West Indies defeated England in 2020 and whitewashed Bangladesh in 2021. The last series was a historic moment for them as they rested their main Test players from the squad and with the young players, they surprised Bangladesh. West Indies also chased down 400 plus totals and saw one of the greatest knocks from a debutant.

Brathwaite got the reward and he replaced Holder as the new skipper of the Test side. Jermaine Blackwood will be the deputy of him. Rahkeem Cornwall, and Jomel Warrican both were impressive in the spin-attack. Blackwood is the leading run-getter for the hosts in WTC 2019-21 with scoring 579 runs at an average of 38.60. Bonner and Mayers both were the top-scorers for Windies in the last assignment. Holder will be back in action and he has been a key player for West Indies in WTC. West Indies have a good balance but in the absense of Hope and Chase, West Indies have to play better against Sri Lanka. The match should be a competitive one.

Antigua’s track is good for batting but bowlers will be in command later as the match progress. Spinners have an advantage on day 4 and day 5. Pacers can trouble in the morning session. Toss will play an important role and both sides would avoid playing in 4th innings.