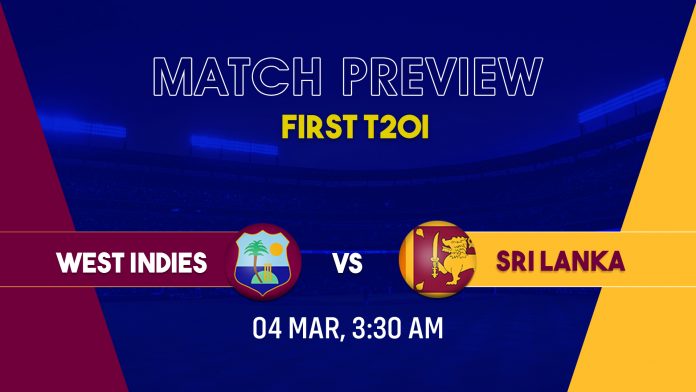 West Indies will host Sri Lanka in the opening T20I of the series at Antigua. Sri Lanka will be led by stand-in skipper Angelo Mathews, while Pollard will be the captain of the West Indies.

Sri Lanka are on tour to West Indies for an all-format series and the first assignment will start with T20s. The opening T20I will be played at Antigua. West Indies will look to start their preparation for the upcoming T20 World Cup which will be held in India this year. Chris Gayle and Fidel Edwards came back into the squad. The charismatic Gayle last played in the shorter format in March 2019 and he is only available for the T20 format. Gayle is in good touch and he was in top-form in Indian T20 League 2020. 39-year-old fast bowler Fidel Edwards, who last played for the West Indies in 2012 also made a comeback in the squad.

Andre Russell has already been ruled out of the series due to COVID-19. Pollard will lead the side who won the Caribbean T20 League title and the Indian T20 League last year. Lendl Simmons and Gayle might open, followed by Pooran and Fletcher in middle-order. Pooran has justified his role with fabulous form. Evin Lewis is also a good option at the top. Pollard will have to take a tough call between Holder and Fabien Allen. The Bowling unit will be a big concern in absense of their strike bowlers. West Indies are a top side in T20 format but they are not in good form. They recently lost to New Zealand 2-0 and in the last home series, they lost to India.

Meanwhile, Sri Lanka is struggling since finding the new coach in Mickey Arthur. Chaminda Vaas resigned just before the tour after being appointed as the bowling coach. Dasun Shanaka was the main skipper but he is going to miss this series and Mathews has been appointed as the stand-in captain. Sri Lanka recently organised a domestic T20 League and it helped them to find local talents. Dinesh Chandimal and spinner Akila Dananjaya will make their comeback in the T20 squad. Lahiru Kumara was tested COVID-19 positive, and Test pacer Suranga Lakmal has been named a replacement. Sri Lanka has also included four uncapped players Pathum Nissanka, Ashen Bandara, Dilshan Madushanka, and Ramesh Mendis. Visitors can handover the T20I debut to one of them. West Indies are favourites but Sri Lanka are the underdogs and they have the caliber to stun hosts in Antigua.

Coolidge Cricket Ground is an ideal pitch for T20 and it offers a balance between bat and ball. The ground has hosted women’s matches earlier. Spinners will take slight help from the pitch. Chasing is a safe call after winning the toss.