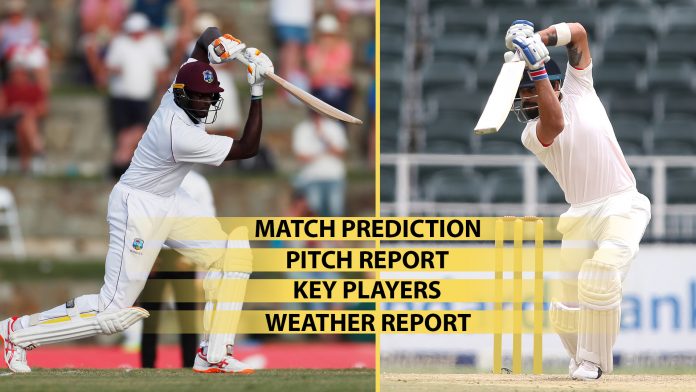 The first Test match of MyTeam11 series will be played at Sir Vivian Richards Stadium, Antigua from August 22 – August 26, 2019. This match will mark the beginning of ICC World Test Championship for both the teams that had already begun on August 1, 2019, with the Ashes series.  Previously, this ground has hosted few Test matches, and the stats say:

The reports coming from Antigua suggests that the pitch will favour the batsmen for the first two days of the match but will start to deteriorate as the game goes on. Spinners are expected to get a great advantage. The team winning the toss will look to bat first as in Test cricket batting in fourth innings has always been a difficult task.

The weather forecast for the first Test is looking good with very minimal possibility of rain on the first and third day of the match. The temperature is expected to hover around 30 degrees Celsius for the entire Test match and humidity will be on the higher side near about 80 %.

Virat Kohli led side will be returning to the longest format of the game nearly after eight months. This will be their first Test match after historic Test series win in Australia. Now, the Indian team will be aiming to start this season and World Test Championship with a win.

Talking about the team combination, in the absence of Murali Vijay, KL Rahul might get a chance to open the innings with Mayank Agarwal. The middle-order responsibility will be on the likes of Virat Kohli and Cheteshwar Pujara while for number 5 position Rohit Sharma might get a place due to his recent form and also his record against West Indies in Test cricket is good but Ajinkya Rahane stats in Test cricket outside Asian continent has been exceptional so, he is also a strong contender for that position too.

Rishabh Pant is expected to be included in playing XI as a wicketkeeper ahead of Saha. Ravindra Jadeja with his all-round abilities will bring a necessary balance in the team at number 7.

The experience of Ishant Sharma, Mohammad Shami, and Jasprit Bumrah will oversee the pace department while R. Ashwin can make a comeback in Test cricket after a long time.

After a disappointing performance in the recently concluded T20 and One-Day Internationals series, the Caribbean giants will be desperate to win this match to give their fans something to enjoy for.

As far as team combination of West Indies is concerned Darren Bravo, Kraigg Brathwaite, Roston Chase, John Campbell, and Shimron Hetmyer will hold the responsibility of batting department. Along with skipper Jason Holder, Keemo Paul is expected to be other medium pace all-rounders while Shai Hope will be seen behind the stumps.

The 26-year-old right-arm off-spinner, Rahkeem Cornwall who has been included in the 13-member squad for the impressive record for Leeward Islands Hurricanes in the West Indies Championship and the West Indies “A” Team will most probably make his debut in this Test match.

Kemar Roach and Shannon Gabriel will be seen serving their national side with their quality pace bowling.

Player to vouch for–

Head to Head in Test Internationals

The West Indies have not been able to beat India in a Test match since 2002 but still hold an upper hand when it comes to head-to-head series records.