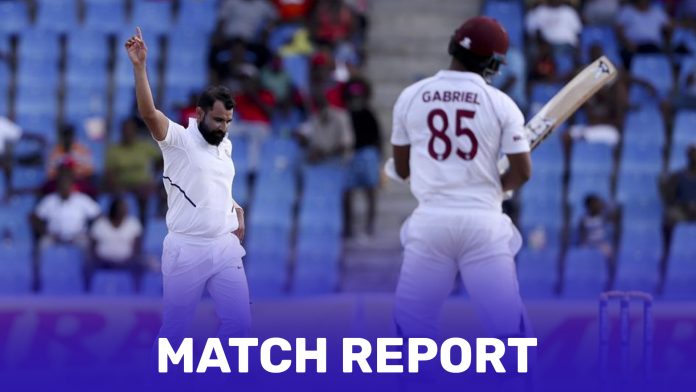 Ajinkya Rahane’s ton coupled with a sensational spell of 5/7 from Jasprit Bumrah led India to upstage West Indies in the first Test in Antigua. Chasing a stiff target of 418 runs, West Indies lost wickets at regular interval and never really recovered. Eight out of eleven batsmen were sent back for a single-digit which speaks volumes about India’s bowling line up. Bundled out for exact 100 runs, India occupies the top position in World Test Championship points table.

Bumrah swung the ball both ways to torment the home batsmen while Ishant Sharma (3/31) and Mohammed Shami (2/13) too contributed in India's resounding victory which gave them a 1-0 lead in the two-match series. Kemar Roach (38), Miguel Cummins (19 not out) and Roston Chase (12) were the only batsmen who managed double-digit mark.

Roach added 50 runs for the last wicket with Cummins but it just delayed the inevitable. No top-order batsman could resist the furious spell from Bumrah, who first dismissed openers Kraigge Brathwaite (1) and John Campbell (7) and later saw the back of Darren Barvo (2), Shai Hope (2) and Jason Holder to complete his five-wicket haul. It is India's fourth-biggest Test win but biggest in away Tests as winning by 336 runs against South Africa in Delhi in 2015-16 remains their best ever.

The result gave Virat Kohli the joint-most number of victories as India captain, tying for 27 wins with MS Dhoni. He has also gone past Sourav Ganguly (11) for most away wins as India captain.

After resuming the day at 185 for three, Rahane scored a patient 102-run knock but young batsman Hanuma Vihari (93) missed out on his maiden Test ton by just seven runs. India declared their second innings at 343 for seven, the moment Vihari was dismissed. They raised a 135-run partnership for the fifth wicket after India lost skipper Virat Kohli (51) early during the fourth day's play.

Kohli's scalp did not help West Indies much as Rahane and Vihari gradually took the game away from the hosts with their confident yet contrasting batting.

It was Rahane's first Test hundred since his 132 against Sri Lanka in August 2017 while Vihari threw away a golden opportunity to get his maiden hundred in only his fifth match.

Rahane's patient knock came off 242 balls with just five shots to the fence but Vihari paced his innings nicely. The Hyderabad batsman hit 10 fours and a six in his 128-ball knock with an impressive strike rate of 72.65. However, in an attempt to get some quick runs, he pulled Holder but could not connect the ball and the under-edge was easily taken by Hope.

Before that Rahane too fell while trying to score quickly, getting caught by Holder off Shannon Gabriel. Off-spinner Chase (4/132) was the most successful bowler for the hosts as he got rid of Rishabh Pant (7) after dismissing Kohli (51).

India lost Kohli in the opening session of the fourth day when his leading-edge off Chase flew to John Campbell, who took the catch on the second attempt. That ended the fourth-wicket partnership between Kohli and Rahane that yielded 106 runs for India. The other overnight batsman Rahane was joined by Vihari, who easily worked the ball around in gaps to keep the scoreboard ticking.

As soon as the new ball was available, pacers Roach and Gabriel operated in tandem but before that West Indies part-timers had bowled 41 overs in this innings alone. While Roach and Gabriel bowled a few testing deliveries, it largely remained an untroubled stay for both Rahane and Vihari.