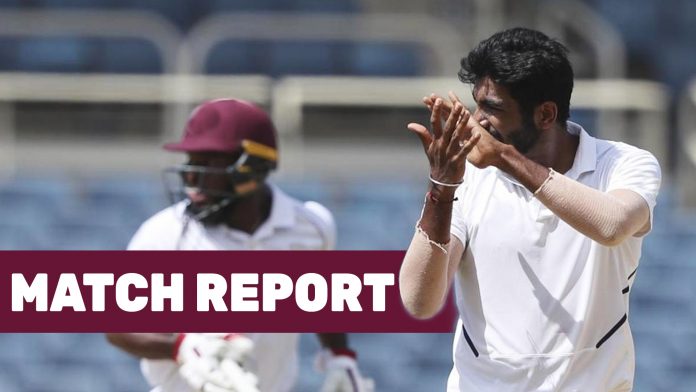 The host started day three on 87/7. Soon, Mohammad Shami bowled an accurate bouncer to show Cornwall the road to pavilion. At the end of the innings, Kemar Roach played couple of delightful drives, but Indian bowlers wrapped up the West Indies innings at 117 runs. Ishant Sharma and Ravindra Jadeja picked up the final two wickets of Windies team.

Despite a healthy lead of 299 runs, Virat Kohli decided to bat in the third innings. However, Indian top-order batsmen once again collapsed as at one stage the team was slumped to 57/4. But Ajinkya Rahane’s and first-innings centurion, Hanuma Vihari’s astonishing half-century controlled the innings. Both the batsmen stitched a remarkable partnership of unbeaten 111 runs before Indian skipper, Virat Kohli declared the innings at 168/4 to give host a massive total of 478 runs.

Chasing the total of 478 runs, Jason Holder led side lost two wickets at the score of 45 only. Once again, the opening combination of Kraigg Brathwaite and John Campbell didn’t last long as in the third over of the innings, Brathwaite nicked one ball that went straight to Rishabh Pant behind the stumps. Soon his partner John Campbell joined him in the pavilion after getting a superb outswinger by Mohammad Shami in the 8th over of the innings. West Indies ended Day 3 at the score of 45/2, needing 433 runs to win.