West Indies vs India: 5 Players to watch out for 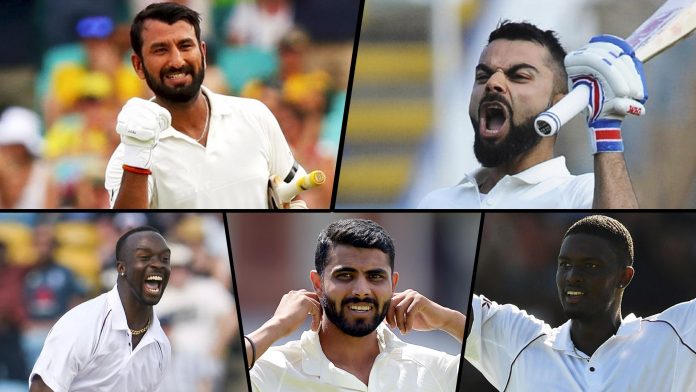 The 3-game T20 and ODI series didn’t end on a good note for the hosts as the Men in Blue whitewashed Windies in both the series. With the World Test Championship to embark soon, Jason Holder & his team will try to get their hands on the coveted trophy. With a rating of 113, India occupies the top spot of ICC Test Team Rankings while West Indies occupies the 8th spot with the ratings of 82.

The test series will kickstart on 22nd August with the first match being played at Sir Vivian Richards Stadium, North Sound, Antigua. Meanwhile, the second test of the series will be played from Aug 30 to Sep 03 at Sabina Park, Kingston, Jamaica. Virat & his boys will look to emerge as the ultimate champions of this tour. With this, MyTeam11 brings to you the 5 players to watch out for:

The Saurashtra boy who first scored a triple century in the U-14 game & came into limelight. He continued to play on the merit and stayed in the scheme of things. Cheteshwar has always been seen as the ‘next Rahul Dravid’. He has been able to continue touch during India tour of Australia 2019, scoring 521 runs. India and the entire cricket fraternity will be looking forward to another heroic performance from Pujara.

Indian skipper, Virat Kohli, with his potential to break-through an intense situation with great ease, secures his place on our list of 5 players to watch out for. Pairing up with Shreyas Iyer in the 2nd and 3rd ODIs to nab terrific knocks of 120 and 114* respectively, King Kohli looks in the form to grab the Tests underhand and bid adieu to West Indies with all the three cups.

The West Indies captain holds the first spot in ICC player rankings following his brilliant all-rounder performance. Known for his capabilities of staying afresh in the longest format of the game, the player couldn’t make a mark during his ODI stint. However, the skipper’s performance will be much-awaited by the fans, as it will be a delight to see the best batsman & best all-rounder in Tests, standing face-to-face.

With 11th spot on the rankings table, Kemar Roach is another West Indies player who has made it to the list. The Caribbean bowler who started his international debut by achieving the best bowling figures, has been on a success spree ever since. The player’s inclusion highlights the fact that the Caribbean Giants are not ready to give up & will fight for the Test title with everything they have.

The beard-man from Team India who recently made news for being nominated for the Arjuna Award is the 5th player, who’ll be the most sought by the audience in the upcoming Test encounters of India and West Indies. With an economy rate of 2.38 in the Test format of the game, the bowling all-rounder will definitely catch the fans by their eyeballs with a terrific performance in the upcoming encounter.

This was our list of the 5 must-watch players for the soon to begin India vs. West Indies Tests 2019, tell us for whose performance you are excited the maximum. If you think we missed out someone, do let us know in the comments. Till then, to stay updated with the latest sports stuff, match predictions and pitch reports, follow MyTeam11.