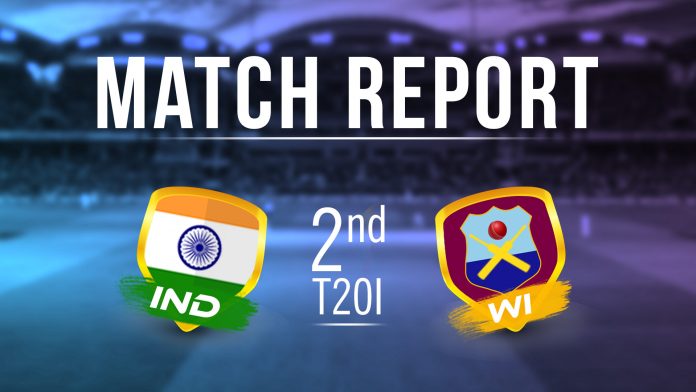 After a resounding six-wicket victory in the first match in Hyderabad, India lost the second T20 International match that took place at Greenfield Stadium in Thiruvananthapuram on Sunday. West Indies humbled India by a margin of eight wickets, ending up their losing streak against India in the shortest format. Batting first, India set a challenging target of 170/7 for the opponent. Chasing the target with ease, West Indies registered a convincing victory and leveled the three-match T20I series. The highlight of this match was Lendl Simmons, who conquered the field with his impeccable performance. West Indies dominated the match since the beginning and it was evident by the half-dozen sixes that Windies players amassed during the match.

The visitors won the toss and elected to field first. West Indies batsmen hammered the ‘Men In Blue,’ as misfields ruled India's defence during the second match. Thanks to Lendl Simmons; it is because of his scintillating knock that West Indies emerged victorious. Undoubtedly, Simmons stole the show with this unmatched batting style. With 4 fours and equal number of sixes, Simmons scored an unbeatable 67 runs at a strike rate of over 148.

Nicholas Pooran scored 38 off 18 balls and Shimron Hetmyer hit 23 off 14 balls to finish the chase in 18.3 overs. Leg-spinner Hyden Walsh (2/28 in 4 overs) pitched the ball in good areas and got some sharp turn on his leg breaks. Kieron Pollard-led West Indies team ensured that final encounter to be played at Wankhede Stadium in Mumbai on December 11 will be the ultimate decider.

It was a gloomy day especially for Indian fielders, as the team could not deliver the best of their potential on the field. But the only exception was the Shimron Hetmyer’s excellent running catch by Indian captain Virat Kohli at long-on. Despite brilliant performances by players like Shivam Dube and Rishabh Pant, India could not get the required momentum during the death overs.

Shivam Dube’s (54 off 30 balls) maiden T20I half-century contributed to India’s target. Dube exhibited a big-hitting prowess as he hit four huge sixes and three fours. Rishabh Pant also played sensibly and scored 33 off 22 balls. But unfortunately, West Indies seamer Kesrick Williams and leg-spinner Hayden Walsh got the two wickets (Shivam and Pant) respectively. Apart from these players, other Indian batsmen struggled to score good runs. In fact, Skipper Virat Kohli, who decimated the Windies attack in the previous game, did not deliver his best in this match. Opener KL Rahul, who hit an epic half-century in the first match, failed to sustain his form and got dismissed for 11.

During the post-match presentation, Virat Kohli acknowledged that India’s field has been the primary reason for their defeat. He said, “If you field like that, no total is good enough. With the ball we were good, the first four overs. But if you drop chances, it's going to cost you. Fielding is something – we need to be more brave”.