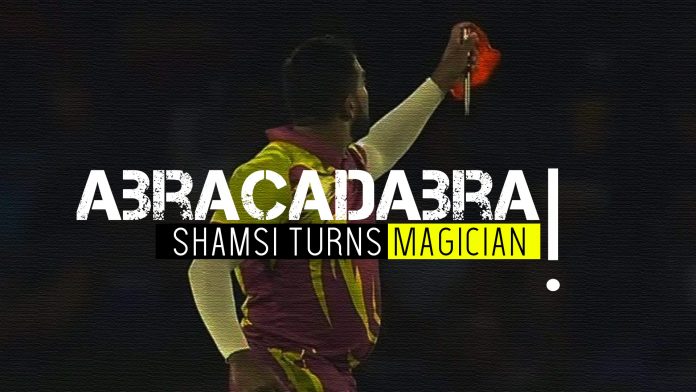 Cricketing arena has always thrown its fans surprises! Players always find a way to swoon their fans with their magical performances. But this time, a bowler pulled off quite an astonishing magic show on the field. South African spinner who is famous for his wacky signature celebration style – Tabraiz Shamsi was witnessed doing majestic skills during the ongoing Africa T20 League when the match was being played between Paarl Rocks and Durban Heat on Wednesday. Representing Paarl Rocks, Shamsi dismissed Wihab Lubbe and showcased a magic trick on field.

To celebrate his wicket, Shamsi took out a red handkerchief from his pocket and turned it into a silver stick. However, Durban Heat chased down the target of 197 despite Lubbe’s dismissal, marking their third successive victory of this season.

Africa T20 League’s official handle posted the video, which is making rounds all over the internet, with fans calling it the greatest celebration in sporting history.

This is not the first time Shamsi has grabbed headlines for such an exuberant celebration. Shamsi attempted a similar trick on the field previously, but failed to execute it.

He also garnered worldwide attention when Proteas arrived in India for T20I series. After removing Shikhar Dhawan in the eighth over, the left-arm spinner took off his shoes and pretended to make a call by using the shoe as a mobile phone. Looking at his constant zeal for magic, it looks like Shamsi has a penchant for bizarre celebrations.

On being asked about his love for magic tricks, he said, “I have always been fascinated by magic and different tricks. From the age of about 15 or 16, I wanted to become a magician as it was a hobby of mine”.

"Entertaining on the field is just my way of taking the pressure off myself and being able to enjoy things. I feel like when I am myself, I am able to play my best cricket,” he concluded.