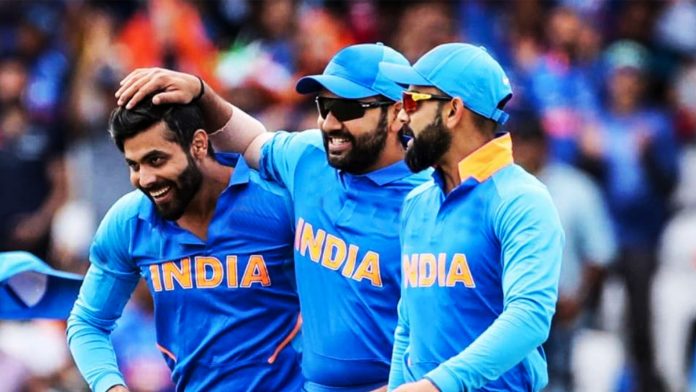 Ahead of the West Indies tour, the Indian skipper Virat Kohli rubbished reports of a speculated rift between him and Rohit Sharma. However, the latter is yet to break the silence on the subject. Interestingly, on Monday, a video went viral on social media where Rohit Sharma, Virat Kohli, and all-rounder Ravindra Jadeja can be seen having some fun.

In a video doing the rounds on social media, the duo can be seen playing the game of Dumb Charades, which is something very popular amongst the current generation. Kohli was also in the room and he gave a smile looking at them, having fun. While Jadeja can be seen enacting skipper Kohli, Rohit had the task to make the right guess by judging the all-rounder's action.

After a few attempts, Rohit was successfully able to guess it was Kohli after Jadeja enacted the right-hander's batting action. The video was posted by the official broadcasters of India vs West Indies series and captioned, "What do you think Ravindra Jadeja was trying to communicate with Rohit Sharma about Virat Kohli?"

Meanwhile, in the three-match T20 series, the men-in-blue have taken an unassailable 2-0 lead with the final encounter yet to be played between two teams.

Further, Rohit Sharma had a decent outing with the bat in the second T20 International smashing 67 runs off 51 balls. Ravindra Jadeja, on the other hand, who made a comeback to the shortest format of the game after some consistent performances in the recently concluded ICC World Cup 2019, has also left a mark with ball and bat.

This remains to be seen if the duo can continue their dazzling touch in the final the T20 encounter of the series which is scheduled to be held in Guyana.