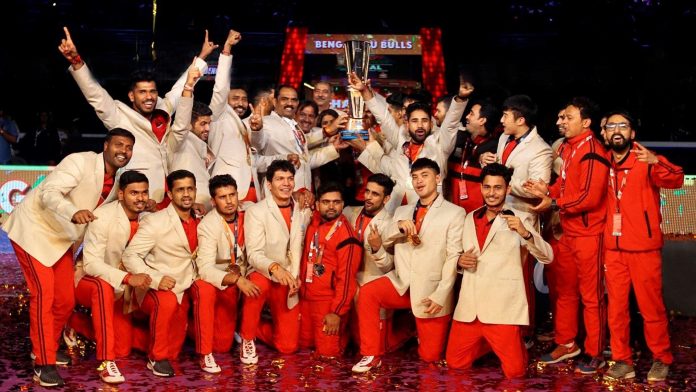 Bengaluru Bulls will enter the seventh season of Pro Kabaddi league with the tag of defending champion. The team lifted its maiden Kabaddi league trophy with a victory over Gujrat Lions, courtesy to the brilliant performance by Pawan Sehrawat. With the help of 22 raid points, the player single-handedly helped his team to dominate in the first half and take the title with them.  Apart from this, Bengaluru Bulls were the runners up of the 2015 season. The team lost to U Mumba in the grand finale. They also reached the semi-finals of the inaugural season.

Like last season, this time also, Bengaluru Bull's success will depend on Rohit Kumar, Pawan Sehrawat and Mahender Singh’s form and performance. Besides this Bulls have brought some new young talent in their squad like Banty (raider), Aman (left corner) and Mohit Sehrawat (right cover). Other than this Lal Mohar Yadav (raider) and Sanjay Shrestha (all-rounder) could be used as substitutes if things don't go right for them.

July 28: U Mumba vs. Bengaluru Bulls

August 12: UP Yoddha vs. Bengaluru Bulls

September 27: U Mumba vs. Bengaluru Bulls

October 11: UP Yoddha vs. Bengaluru Bulls

Share
Facebook
Twitter
Previous articleEngland becomes the New World Champion after a win in a heart-stopping thriller
Next articleWorld Cup 2019: Two Indians included in the ICC’s “Team of the Tournament”