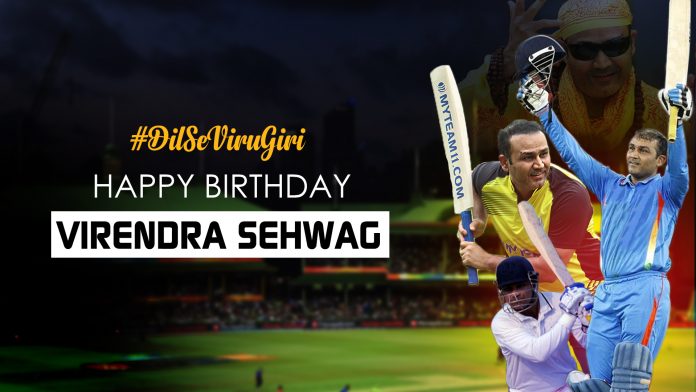 Three years by the side and it still feels like yesterday when the whole cricket stadium used to howl “SEHWAG” “SEHWAG” and the player was always ready with his gloves tightened to destroy the opponents with his breath-taking game. Virender Sehwag celebrates his 40th birthday this Saturday and in an effort to make his birthday special we are here with some unknown facts and secrets of the “Nawab of Najafgarh.” Read on to know more.

Sehwag who is recognized as one of the most destructive players of the cricket history was banned from playing cricket in his childhood days. Sehwag pestered his parents to let him play cricket as he was more into cricket than studies to which they agreed initially but when Sehwag lost one of his teeth while playing cricket, his father banned him from playing the game. However, he escaped the ban with the help of his mother.

Sehwag’s debut for team India was nothing less than a nightmare for his career. Sehwag made his debut for team India with an ODI against Pakistan wherein he failed to woo both the audience and the team with his performance by retiring with a single run. Also, Sehwag’s bowling performance was ineffective, conceding 35 runs in just three over which became the reason for his drop from the team for the next 20 months.

The fourth ODI of Sehwag’s career was the turning point for him. Sehwag was given another chance to start his international career in mid-2001, and he used that opportunity to outshine as one of the most prominent players of the team. Sehwag was declared Man of the match for his performance against Australia wherein he scored 58 runs alongside hauling three wickets, helping India to beat Australia.

Sehwag has plenty of records registered under his name. The records owned by Sehwag include the highest score made by any Indian player, fastest triple century in the history of cricket, fastest 250 runs, most 290+ runs made in Tests (as a joint holder with Don Bradman), etc.

Conquering the land of Multan and being recognized as the “Multan ka Sultan.” Sehwag attained the title of Multan ka Sultan in the year 2004 when he defeated Pakistan in their homeland and scored the first triple century of his career in Multan. The title was given to him for his heroic performance on the field.

Often quoted as the clone of “God of Cricket: Sachin Tendulkar.” Sehwag had been one of the most destructive players ever witnessed by the cricket history. Sehwag who used to play as a middle-order batsman for team India was given a chance to open for the team against New Zealand but failed to create a charm. However, in his next game as an opener, he scored a century just off 70 balls and established himself as an opener. This high-scale performance of him made people compare his batting style to that of Master Blaster alongside him being referred to as the latter’s clone.

Now, that we have unveiled a lot of secrets and unknown facts about Virender Sehwag, we hope that we have helped you in knowing him a bit better than before. We wish Sehwag a very happy birthday in advance and hope that his life continues to be full of joys. For more cricket stories and cricket, updates stay connected to MyTeam11.