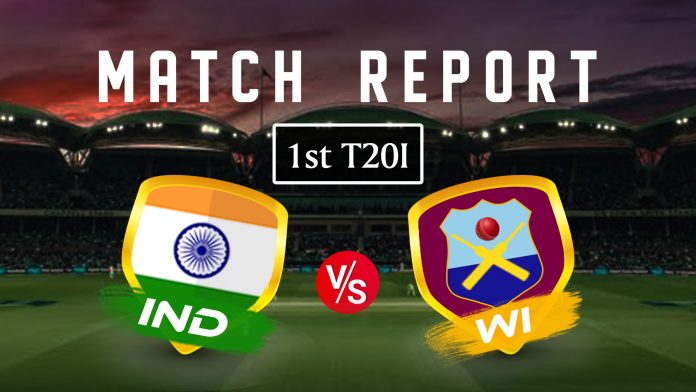 The Chase Master Virat Kohli was at it again as he KO’s West Indies and powered India to an emphatic 6 wicket win in the first T20I. It was a masterclass from Kohli as he accelerated beautifully through the innings to give India the 1-0 lead. King Kohli was at his vintage best as he dismantled the Windies bowling attack with his vigorous bottom hand shorts. The skipper smashed 94 runs in just 50 balls and achieved his highest score in T20Is. Opener K.L Rahul too contributed with a brisk 62 as the duo helped to accomplish India’s highest chase in T20 Internationals. It was a sorry day for the West Indian bowlers. Barring Sheldon Cottrell, all the Windies bowlers were under the pump as they got hammered by Kohli and Rahul. Kesrick Williams had a nightmare of a day as he went for 60 in 3.4 overs.

Earlier in the evening, toss coin came down in the favour of Indian skipper Virat Kohli and he elected to chase with dew expected to affect the game later. Bhuvneshwar Kumar made his way back into international cricket since the West Indies tour in August. West Indies, on the other hand, made one change to their last XI by leaving out Keemo Paul for Hayden Walsh.

The start for West Indies was not ideal as they lost Lendi Simmons early but Lewis and King decimated the Indian bowlers in the powerplay. The pair added 51 runs in just 28 balls. Washington Sundar ended Lewis’ entertaining innings of 40 runs but the Indian bowlers didn’t get any respite as King joined by Hetmyer continued to pulverize the bowlers. Heytmar who looked in awesome touch slammed his first T20I half century. West Indies skipper Keiron Pollard too joined the party with a fiery knock of 37 runs in 19 balls. Desperate for a wicket, skipper Virat turned to his wicket taking bowler Yujvendra Chahal and he delivered yet again. Chahal got rid of Heytmar and Pollard in the space of three balls and gave India some breather. India’s slopy fielding and Jason Holder’s brutal hitting at the end powered West Indies to 207 runs.

Indian openers Rohit Sharma and K.L Rahul started cautiously. But the in-form Rahul started to flex his muscles in the third over as he smashed Holder for three consecutive boundaries. Rohit Sharma couldn’t contribute much as he picked Hetmyer at deep midwicket but Skipper Kohli and Rahul kept India’s chase on track as the pair added 100 runs for the third wicket. Pierre ended Rahul’s blistering 62 runs knock with a flighted delivery. But Kohli continued to cream the Windies bowlers with his impeccable batting. The Indian skipper started going hammers and tonks in the 16th over as he whacked Williams for 23 runs. The cameo from pant took India closer to the total and the master of chase ensured that his side get over the line with 8 balls to spare. India now leads the series 1-0 and the action now moves to Thiruvananthapuram for all important 2nd T20I on 8th December.