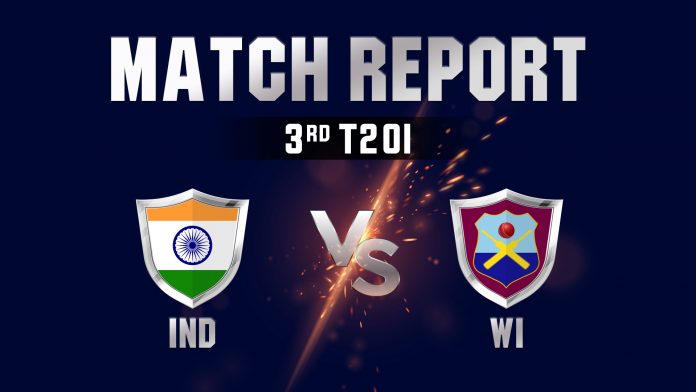 It was an absolute run-fest at the Wankhede as Team India kayoed West Indies by 67 runs to clinch the series 2-1. India put up a mammoth total of 240/3 on the board, courtesy of some scintillating batting by Rohit (71), Rahul (91) and Kohli (70*). West Indies in return surrendered with a score of 173. Skipper Pollard (68) and Hetmyer (41) were the lone fighters for the Windies.

Earlier in the day, West Indies won the crucial toss in the decider at Wankhede Stadium; a ground made for chasing T20 totals in the night dew. West Indies went with same playing XI that thrashed India in the 2nd T20I. India went with two changes. Mohammad Shami returned to the shortest format after two years in place of Ravindra Jadeja. Kuldeep Yadav pushed out the other wrist spinner Yuzvendra Chahal from the playing XI. Rohit and K.L Rahul gave India a dream start as the duo smashed 72 runs in the first six overs. Indian openers brilliant and thunderous 135- run stand laid the foundation for the rest of the innings. Kohli then slammed the doors on the visitors by playing a devastating knock of 70 in just 29 balls and guided India to an astonishing score of 240.

The rampaging Rohit Sharma was at his best again at his home ground. The hitman belted a 34-ball 71, comprising six fours and five sixes. With his first six, Rohit Sharma became the fastest batsman and the first Indian to reach the milestone of hitting 400 international sixes across all formats. Rohit Sharma hit his 400th six off Sheldon Cottrell in the last ball of the third over by smashing the ball in the gap between short third man and the keeper. Rohit has now become the fastest batsman ever to reach the milestone. He has taken just 360 innings. He is followed by Pakistan’s Shahid Afridi (437 innings) and West Indies’ Chris Gayle (486 innings).

POWER play in the powerplay

Team India was off to a flying start courtesy Rohit and Rahul, who put up a carnage at Wankhede. Indian openers were ruthless from ball one as they took apart the West Indies attack. Rohit Sharma unleashed his power in front of his home ground as he scored 71 at a strike rate of over 200. K.L Rahul’s love affair with Wankhede continued as the opener scored his third consecutive fifty at the stadium. Rahul along with Rohit powered India to the fifth-highest powerplay score in T20I history, by putting up 72 runs on the scoreboard. Both the openers formed a brilliant and thunderous 135- run opening stand in just 11 overs. Rahul missed out on another T20I hundred as he got dismissed on 91 in the final over.

Skipper Virat Kohli stamped his authority with yet another sublime innings as he just pulverised the Windies bowlers. The charged-up skipper deposited the ball into the stands at will as he completed his fastest half-century, in just 21 balls. It was Kohli’s 100th international fifty across all formats. It was one of those rare innings where Virat Kohli just walked out and started smashing it from ball one. West Indies seemed to hold the innings after Rohit's dismissal but Kohli came in and continued the demolition work to give India the finish they needed. The skipper remained unbeaten with 70 off 29 balls.

Pollard and Hetmyer, The lone warriors

West Indies in reply to India’s big target started horribly as their top order went off inside the first six overs. After losing Lewis from injury, Windies suffered a major blow as they lost Lindl Simons, Brandon King and Nicholas Pooran in the space of 7 balls. Simons, who was the hero in the last match, departed on a paltry score of 7. West Indies were always going to struggle after a poor start, but they kept the fans entertained courtesy some thrilling hitting from Shimron Hetmyer and Kieron Pollard. Hetmyer and Pollard added 74 in no time and worried India considerably but Kuldeep Yadav ended Hetmyer’s brave innings of 41. Pollard continued to fight and reached his half-century in 34 balls, But, his brisk innings came to an end as he pulled straight to deep midwicket and with that West Indies hopes also came to a disappointing end.

After the action pack T20I series, the action now shifts to the ODI series, which begins in Chennai on Sunday.