Virat Responds to Big B’s Tweet on his “Chequebook Celebration” 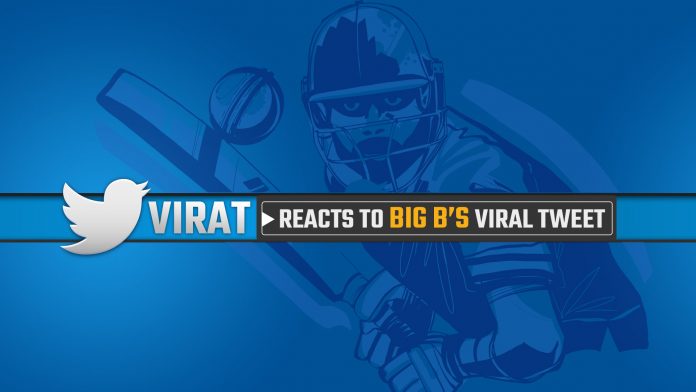 Indian skipper Virat Kohli is known to catch the headlines, whether it is for his on-field fiery performance or his love life revolving around his wife Anushka Sharma. This time, Virat took the world by storm with his unique celebration style. In the first T20I in Hyderabad on Friday, not only did India thrash West Indies by six wickets, but the match caught the attention of sports lovers who saw yet another incredible performance by Virat.

Impressed by Virat’s antics, Big B took to Twitter to congratulate him in his own filmy way. Mr. Bachchan, who is known for his sense of humor, reframed a brilliant Hindi dialogue from his blockbuster movie ‘Amar Akbar Anthony’ and shared a witty post in Virat’s praise. His tweet translates to “Man how many times have I told you .. Do not tease Virat, do not tease, do not tease … But, you don't listen to me… Now he wrote a slip and gave it in their hand !!!! See see .. look at West Indies' face; he killed it, he killed it !!” Enthralled to see his post, Indian team captain expressed his love and gratitude to Big B and wrote, “Haha love the dialogue Sir. You’re always an inspiration”.

Check' out what Virat replied to Bollywood’s Shahenshah on Twitter.

This epic moment was witnessed when Virat hit Williams for a six. He gave Williams a taste of his own medicine. Remember the T20 in Jamaica back in 2017, when Williams celebrated Virat’s wicket by writing his name in his imaginary notebook. Virat had not forgotten that day and there it was, a bitter revenge on the field. And it is evident that Virat Kohli’s signature revenge style nailed it!

Virat threw light on that incident during the post-match presentation, stating, “It’s not the CPL (about Williams’s celebration), it happened to me in Jamaica when he got me out. So, I thought I’ll tick a few in the notebook as well, but all good. There were a few words, but smiles at the end”.

He concluded, “Good competitive cricket but in the end shake hands and give a hi-fi. That’s what cricket is all about”.