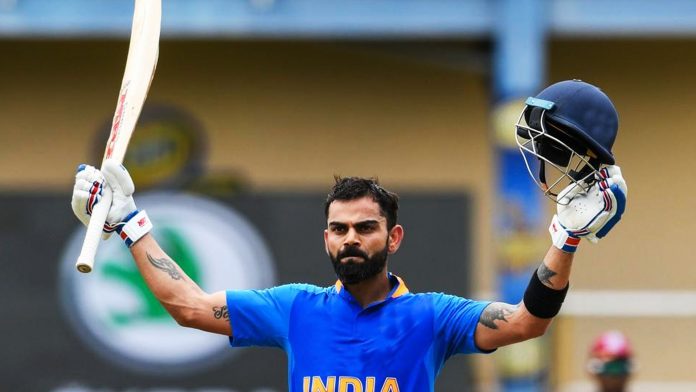 The pillar of India’s batting line up Virat Kohli had not scored a ton in One-Day Internationals since the Ranchi ODI against Australia in March 2019. In the World Cup, he had scored five consecutive fifties and uncharacteristically, did not convert any of those scores into hundreds and by his own set standards – it certainly had raised some eyebrows in the cricketing fraternity on his ability to convert starts into big scores. However, five months later, at the Queens Park Oval, King Kohli not only broke the century rut by smashing his 42nd century but also shut his critics in grand style. Aided by a power-packed performance by Shreyas Iyer and a sensational spell of 4/31 from Bhuvneshwar Kumar, helped India to register a 59-run win via the DLS method in the second ODI to take a 1-0 lead in three-match series against West Indies on Sunday.

Kohli's knock once again reiterated that in the ODI game, there is none better than him while Iyer's knock at No.5 will give the team management plenty of positives as they aim to sort out their middle-order woes. India chose to bat but they suffered an early jolt when Sheldon Cottrell trapped Shikhar Dhawan LBW for 2 in the first over itself. With just one second left to go, Windies skipper Jason Holder opted for the review and replays showed that Dhawan did not edge the ball and he was a goner. In stepped Kohli and he got going with two fours off Kemar Roach to signal his intent.

Kohli found his feet moving at the start of the innings and collected boundaries at will while his counterpart Rohit struggled for fluency. With Kohli’s heroics and Rohit Sharma’s determination to stick at the wicket, the partnership went past fifty and Kohli broke some records as he became the leading run-getter in ODIs against the West Indies, breaking the 26-year-old record set by Javed Miandad of Pakistan. Rohit fell for 18 to Roston Chase as he miscued the inside-out lofted shot and the situation was ideal for Rishabh Pant to cement his credentials in the middle order; however, the young sensation couldn’t capitalize on the opportunity as he played an ugly hoick across the line to Carlos Brathwaite to fall for a scratchy 20.

While Pant missed his opportunity, Iyer pounced on it and showed his mettle. The Mumbai right-hander smashed two fours off Roach as Kohli smoothly made his way to 100. Kohli neared his century by lofting Holder over long-off for the first six of the game and his century drought finally ended when he pushed a full ball to long-on. Kohli went past Sourav Ganguly's tally of 11363 runs to become the eighth-highest overall run-getter in ODIs while Iyer smashed his fifty. Kohli also became the first individual to hit 200 fours against the West Indies and also 2000 runs in ODIs.

Iyer reached his fifty in style and Kohli raised his gear by blasting three fours in one over bowled by Oshane Thomas. However, West Indies fought back in the death overs when Kohli miscued Carlos Brathwaite to be caught at long-off. After a 15-minute rain delay, Iyer looked good to get India near 300. However, after hitting Roach for a six, Iyer shuffled a bit too across to the offside to be dismissed by Holder for 71. The quick wickets of Iyer and Kohli dented India in the death overs and they managed 279/7.

In response, Queen's Park Oval had a moment to celebrate when Chris Gayle became the leading run-getter for West Indies overall in ODIs by breaking long-standing Brian Lara's record 12-year record. However, Bhuvneshwar Kumar cut the celebrations short when he trapped Gayle in front for 11 and even the review did not save him. Khaleel Ahmed got the wicket of Shai Hope dragging on for 5 but Evin Lewis, plagued by an ankle injury and cramps in the heat, fought on. After a 39-minute rain delay, the West Indies had a revised target of 270 in 46 overs.

Following the break, Lewis and Shimron Hetmyer regularly found the boundary but Kuldeep Yadav broke the dangerous stand when Hetmyer mistimed a pull shot to be caught at short cover by Kohli.

Nicholas Pooran got going with a couple of clean hits off the spinners while Lewis notched up his sixth fifty. With Pooran and Lewis batting confidently, West Indies managed to sneak above the DLS par score and for some time, they were in the hunt to pull off a superb win. However, Kuldeep took his second wicket when Lewis fell for 65 but Pooran still hung in and until he was at the crease, West Indies had a faint glimmer of hope.

However, the wickets kept tumbling for the West Indies and they couldn’t keep up with the required net run rate. Holder along with Cottrell tried to take the game till the end but failed to do so as India register their first fifty-over win after horrific World Cup exit against New Zealand.