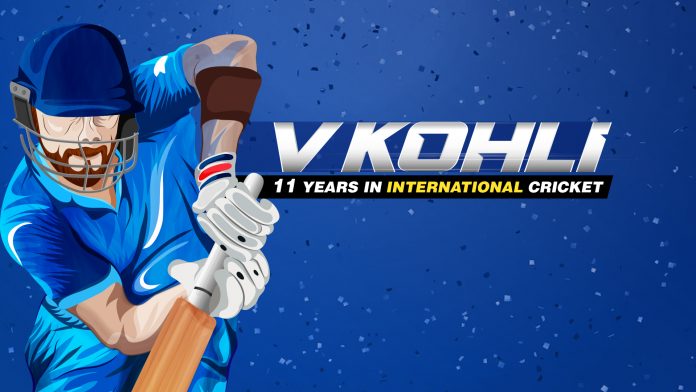 We an individual blend dedication and grit while epitomizing the facet named perfection in the most beautiful way possible. Every time we see 30-year-old Virat Kohli step onto the cricket field, it feels that national crest has been imbibed on his chest and it wouldn’t be wrong to say that in his 11 years of International cricket journey, the greatest statistician would have found it challenging to keep up with Kohli’s remarkable touch. He has not only set the cricket stage up but has also set an example for the generations to come.

On his 31st birthday, let's look back on his glorious International career:

On August 18 in 2008, opening the innings against Sri Lanka at Dambulla with his Delhi state-mate Gautam Gambhir, Kohli managed 12 before being sent back. Virat experienced some nervous moments in his debut encounter which eventually turned out to be a forgettable outing, but he eventually came into his own and lived up to the hype after leading India to their second Under-19 World Cup title in 2008. In his fourth international innings, he scored a maiden half-century but had to wait for 10 more innings to hit a century. And the rest, as they say, is history.

Since making his debut as a teenager, Kohli has become India’s most trusted batsman across the formats and is fast building a reputation of a fiercely aggressive captain. While Kohli, the batsman, has proved his credentials with a flurry of record-breaking innings over the past decade, Kohli, the captain, is still a work in progress.

He has peeled off centuries with ridiculous ease. In the list of most hundreds in ODIs, he is second after Sachin Tendulkar. With 43 tons already, Kohli is in the driving seat to overtake Tendulkar’s record of 49 centuries and before we will mark 12th anniversary, Virat Kohli will certainly surpass the legend if he continues to rule the bowlers on the cricket field.

To date, in 239 ODIs, he has scored 11520 runs at an astonishing average of 60.31 – which is most by any playing cricketer. At 30, he is the chase-master and will certainly synonymous with chasing targets in the future.

His prolific run-scoring isn’t limited to ODIs. In Tests too he holds a host of records including the first Indian captain to hit a double century overseas. After taking over the reins of the Indian Test team, he scored three centuries in his first three innings as captain – the first to do so. In 2017, he scored 11 centuries – the most by a captain in a calendar year and thus claimed the award for the ICC Cricketer of the Year.

Virat has already been renamed as ‘King Kohli’ and every time he steps on the cricket field, he shows why he has been kept in that cadre. He has redefined the dynamics of cricket in India and will certainly emerge as one of the finest players the game has ever produced.