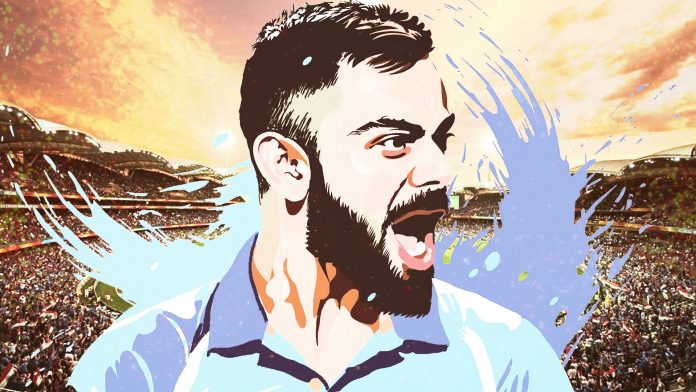 The angry young man of the Indian cricket team seems unstoppable as his aggression is clearly visible in his batting performance. The player gets another enchanting record registered under his name with team India scoring an alluring total of 321 runs against West Indies in the 3rd ODI of the 5 match ODI series.

The 29-year-old player who is known for his exceptional performance as a batsman, recognized as a top-notch player in World cricket history, become the fastest player to score 10,000 ODI runs. Virat scored an unbeatable 157 runs off 129 balls to acclaim this title, surpassing Sachin Tendulkar.

Sachin Tendulkar, the God of Cricket, as he is profusely known, completed his 10,000 ODI runs in 259 innings when he was 27 years old against Australia back in the year 2001. However, the Indian Captain, Kohli achieved this milestone at the age of 29 years in just 205 innings.

Kohli, apart from becoming the fastest human on planet earth to score 10,000 runs, becomes the 5th Indian Batsman and 13th player overall to enter the 10,000 ODI runs club. Kohli was short of 81 runs to complete his 10,000 ODI runs mark when he came down to the crease, and the player achieved the title like a pro. Kohli scored a century, hitting West Indies player Ashley for a single to bag the title.

On the other hand, apart from Kohli, the other players who are already in the 10,000 ODI runs club are Sourav Ganguly, Rahul Dravid, Sachin Tendulkar, and MS Dhoni.

We further wish to see, the aggressive captain attaining various milestones to retain his place as a world-class batsman. But, till then we will focus on rendering cricket stories demanded by every cricket lover, so stay tuned for more.