U Mumba Volley Qualify for Play-Offs; Will Face Calicut Heroes in First Semi-Final 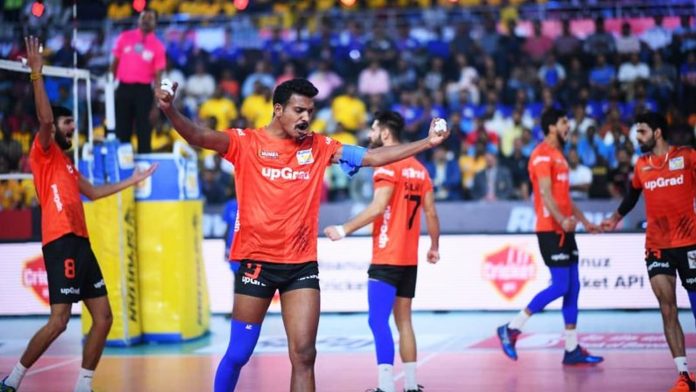 ~League announces referral system for the playoffs and final~

The first set started with both teams giving each other a tough fight. Each point was thoroughly contested but two errors from U Mumba costed them as Ahmedabad went into the first Technical Time Out (TTO) with an 8-7 lead. U Mumba’s errors were hitting them bad as two more unforced errors helped Ahmedabad race into an 11-8 lead. U Mumba immediately called for a Super Point and converted with a Vinit Kumar spike. Ahmedabad also called for a Super Point and took the advantage of the same. Ahmedabad were able to protect the advantage and won the set 15-10.

The second set looked like a different story though, U Mumba skipper Deepesh Sinha was looking in good rhythm, as he scored from 2 spikes and a block to give his side an 8-5 advantage at TTO. Ahmedabad called for a Super Point at 8-11 and converted with a Victor Sysoev spike. But U Mumba was in no mood to let the advantage slip as they won the set 15-12 to level the match 1-1.

In the third, U Mumba were off to a flying start as they scored 4 quick points with Saqlain Tariq coming up with the first Super Serve of the match. U Mumba was the team in form as they went into the TTO with a 6-point advantage. Ahmedabad looked like as if they will mount a comeback as they got 3 points on the trot at 5-11, they even converted their Super Point as the score stood 9-12 in favour of U Mumba. Ahmedabad was fighting back and the difference was only of 2 points at 11-13 after two continuous points by Sysoev on a spike followed by a serve. U Mumba managed to close the third set 15-13 with a spike by skipper Sinha.

U Mumba was serving immaculately in the fourth set as two serves by Pankaj Sharma and one by Kumar helped U Mumba to a 9-4 lead. Ahmedabad called for a Super Point at 5-10 and was successfully converted by Sysoev. Ahmedabad fought back hard and brought the score to 12-13. U Mumba held their nerve and a block by Nicholas Del Bianco won the set for them by 15-12. U Mumba led 3-1 at this point. U Mumba was relentless in the last set as Vinit Kumar led the charge with a Super Serve and two more serve points. U Mumba won the set 15-8 and the match 4-1.

Rule modifications for the play-offs:

The play-off matches will be played in a best of 5 set formats with each set of 15 points each. In the event of scores being 14-14 in any of the sets, the team that first establishes a difference of two will end up winning the set. However, in the event of score reaching 20-20, the 21st point will be the deciding point.

In the Play-off matches, the teams will be given one referral per set. The referral will be lost once taken by a team irrespective of whether the team wins or loses the referral. The referral can only be called for net touch, touch out and line calls.

The match will be broadcast Live and Exclusive on SONY SIX and SONY TEN 3 and will be streamed live on SONY LIV from 6:50 PM IST on Feb 19th, 2019.

RuPay player of the match: Vinit Kumar of U Mumba Volley