Twitter Is flooded with Wishes on Virushka’s Second Marriage Anniversary 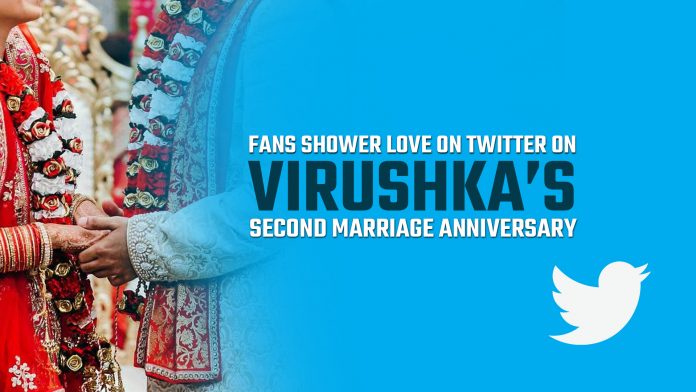 Two years ago, on 11 December 2017, Indian skipper Virat Kohli and the Bollywood actress Anushka Sharma tied the knot in an intimate wedding in Italy. The power couple who are lovingly called Virushka by their fans wished each other on social media with romantic throwback pics.

Sharing an unseen picture of herself with Virat from their wedding, Anushka Sharma wrote, "To love another person is to see the face of God-Victor Hugo. The thing about love is that it's not just a feeling, it's much more than that. It's a guide, a propeller, a path to the absolute truth. And I am blessed, truly, wholly blessed to have found it.”

Virat Kohli too posted a lovely black and white picture of himself and Anushka and wrote, "In reality there is only love and nothing else. And when god blesses you with the person who makes you realise that everyday, you have just one feeling, gratitude.”

Here are some Twitter reactions on their Second marriage anniversary:

Virat Kohli and Anushka Sharma recently went on a trip to Bhutan on the cricketer's birthday. The couple gifted fans with adorable pictures from their trip.

Virat will lead India tonight when India take on the West Indies in the third and final T20 International at the Wankhede Stadium in Mumbai.