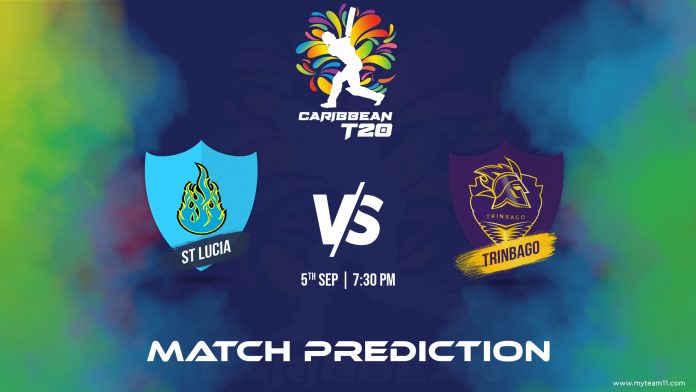 The Caribbean Premier League in its final days and two in-form sides Trinbago and St Lucia will be squaring off in the first Saturday fixture. Trinbago is unbeaten in the tournament, winning all eight matches. In the previous encounter, they rested Narine, Pollard, and Fawad but it didn’t affect Knight Riders’ form as they defeated Patriots by 59 runs. Riding on Simmons’ 96 off 53 balls and Daren Bravo’s gritty 36, Trinbago posted 174. In the chase, the Patriots were completely out of the contest and were restricted on 115.

Meanwhile, St Lucia Zouks had a positive campaign in the tournament with five wins out of eight matches and they have already qualified into the semifinals. In their previous outing, they suffered a defeat against Guyana Amazon Warriors after yet another batting failure. Zouks finished on 109/7 in the first innings and Guyana chased it down in 13.5 overs with 7 wickets in hand. The playoff system is avoided this time so both sides would try to give their bench another chance ahead of the semifinals. Nabi may travel home for the domestic T20 tournament so St Lucia needs a backup for the knock out stage. Chase could get the game after one match rest.

Brian Lara Stadium is a decent T20 ground. Being the first game of the day, it would offer a good amount of runs. Spinners might take advantage, later the match progresses. Rain could play a spoilsport on Saturday. A score around 150-160 would be an ideal total while batting first.