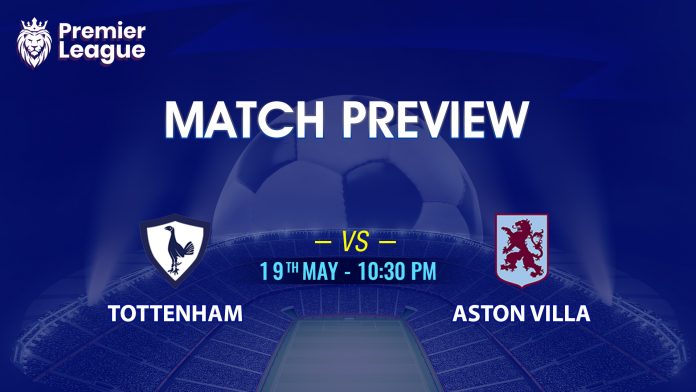 Tottenham will host Aston Villa in the must-win encounter of Premier League to give a final boost to their European qualification. After Liverpool’s victory, Spurs have to take three points from this home game.

Premier League 2020-21 is in its final stage and with two more weeks remaining, the fight for the European qualification is getting hot. After Chelsea’s win last night, the top four become interesting and Liverpool suddenly came as the underdogs after back-to-back wins. Alisson’s injury-time goal against West Brom gave the Reds three points to take a 4-point advantage over the Spurs.

Spurs will welcome Villa at Tottenham Hotspur Stadium to look for vital three points. West Ham’s poor show also helped the Spurs to boost their chances for next season’s Europa League qualification. Harry Kane already indicated this week that it will be his final season for the Spurs and Kane would try to end the season with a European qualification in the pocket. They missed out the silverware after losing to City in the final of the League Cup. Things are not ideal for Spurs. They started the season with a bang and even topped the table at once but later, they lost the temperament with delivering the same performance. Spurs have relied more on Kane and Sons. The duo has been impactful throughout the season.

Spurs recently defeated Wolves and it came after the shocking defeat to Leeds. Harry Kane and Pierre Hojbjerg’s goals assured three points for Ryan Mason’s side. Tottenham’s home record is terrific and only Man City has the better home record than Spurs. They have gained 33 points from 18 games at home and it would be the final home game for Tottenham.

Meanwhile, Aston Villa is sitting in the middle of the table and they are out of European qualification. Recently, Villa lost to Crystal Palace 3-2 after taking a 2-1 lead in the first half. In the span of two goals in 9 minutes sealed three points to Palace. It was the second loss for Smith’s side in the last three matches and they currently take 8th spot in the table, one point ahead of Arsenal. They are still in the race for the European qualification if they bag full points in the remaining two matches which can end their season with 62 points but still they would have to rely on West Ham and Spurs’ results. Spurs may get 7th league double over the Villains, the joint highest league double over any side for them. Villa has lost 12 of their last 13 meetings across all competitions and the last victory came in 2015. Tottenham has won their final home game 10 times out of the last 12 seasons and have just one loss during this phase. Things are difficult for Smith’s side but we can expect a turnaround for them.