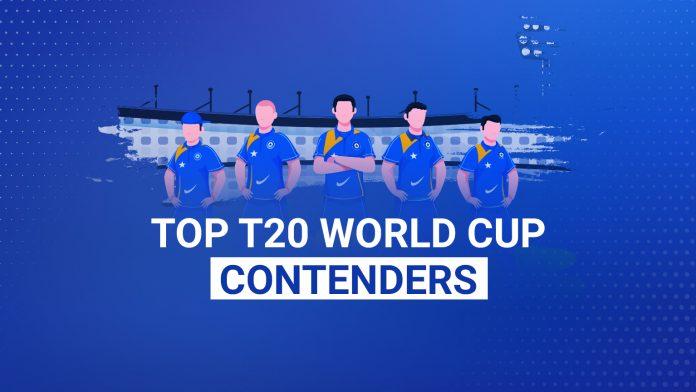 The festive season is just around the corner and the biggest cricket carnival of the year is about to start in 3 weeks. Australia is ready to host the T20 World Cup for the first time as 12 teams look to lay their hands on the coveted trophy. The competition will start from 22nd October at SCG and the final will take place on 13th November at the iconic MCG. Let’s take a look at the Top T20 World Cup Contenders.

The Proteas have a formidable squad for the upcoming T20 World Cup and would be looking to unchain from the tag of ‘Chokers’. The team looks in good form as they have won their last two T20 series against England and Ireland respectively. The team is currently on India tour for 3-match T20 and 3-match ODI series.

Hendricks is the star of the batting lineup and has scored 736 runs in T20s including 7 half-centuries since 2021. A. Nortje is the leader of the South African bowling lineup. Since 2021, the pacer has picked up 20 wickets in 17 matches and would be lethal on flat, bouncy pitches of Australia.

South Africa have played 7 T20Is in Australia where they have won just 2 matches and lost 5. The Proteas are yet to win a major cricket tournament and would be looking to turn the tide to get their hands on first major silverware. Their match against Pakistan on 3rd November at Sydney would be the key fixture if they want to book a berth for the semis.

Just like South Africa, Black Caps are also looking for their first major silverware. The heartbreaking loss against England in the 2019 ODI World Cup still haunts the Kiwi cricket faithful. T20 World Cup arrives in Oceania for the first time and the Kiwis would be looking to engrave their name on the trophy.

New Zealand have won 4 successive T20 series in the last 5 months including 9 wins and suffered a solitary loss against West Indies. They would be competing alongside Bangladesh and Pakistan in a Tri-Series before the T20 World Cup. Although the Kiwis have a 100% losing T20 record in Australia, the current squad has it all to win the T20 World Cup.

Team would be dependent on the likes of M. Guptill to provide blistering starts throughout the tournament. Guptill has scored 962 runs in 29 matches at a brilliant average of 33.40 against group opponents Australia, England and Afghanistan. The onus of bowling attack would be on T. Boult. The left arm pacer has picked 24 wickets in 17 matches since 2021 and is well versed with the Australian conditions.

Key fixture for the Kiwis would be against England on 1st November at the iconic Gabba.

The number one T20 team in the world led by R. Sharma would be the side to beat in the upcoming T20 World Cup. Despite the shock exit from the Asian Cup, the Men in Blue made a comeback and defeated Australia in the recently concluded T20 series. India is all set to host South Africa in a bilateral T20 and ODI series before flying to Australia for the World Cup.

Star all-rounder H. Pandya has emerged to be India’s most important player over the last few months. He has scored 436 runs and picked up 12 wickets in the last 17 matches. J. Bumrah will lead the pace attack and has claimed 8 wickets in 6 matches on Australian pitches. His role becomes all the more important after poor death bowling from Indian pacers over the last few matches.

Team India has a win percentage of 58% in T20Is in Australia. Despite this average record, a side having the likes of R. Sharma, V. Kohli and S. Yadav in their ranks can not be ruled out.

The most important fixture for the Indian team and its fans would be the one against arch-rivals Pakistan on 23rd October at the iconic MCG.

The reigning T20 Champions of the World are set to defend their title on home fortress. Although their recent T20 performances in the Indian subcontinent raised a few eyebrows, the Aussies are a different breed on home turf. Australia will play West Indies and arch-rivals England in a 3-match T20 series before the T20 World Cup.

The hope of retaining the T20 crown rests on the shoulder of opener D. Warner. Warner has scored 419 runs including 3 half-centuries at an average of 52.37 since 2021. The bowling attack will be spearheaded by fearsome M. Starc alongside vice-captain P. Cummins. Starc has been lethal in home conditions and picked up 14 wickets in 13 T20 matches at an economy of just 6.85.

Aussies have won 31 matches out of the 51 they have played at home. Currently at number 6 in T20 team rankings, the Kangaroos have the opportunity to become the first team to lift the T20 trophy consecutively. Their opening fixtures against neighbours New Zealand on 22nd October and rivals England on 28th October would be crucial if they hope to successfully defend their title.

Now don’t just watch the T20 fiesta in Australia on your TV screens, make fantasy teams on MyTeam11 and win cash rewards by competing against players all across the country. Along with fantasy cricket, MyTeam11 also offers fantasy across different sports like football, kabaddi, basketball etc. So stop waiting and start playing only on MyTeam11.