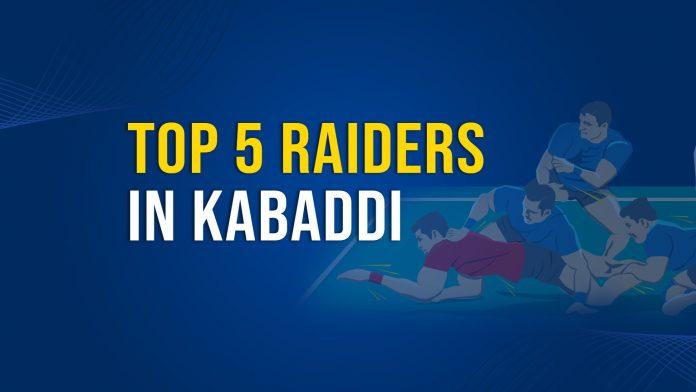 As the 9th season of the Indian Kabaddi League is already underway, the fans will once again witness the same intensity and aggression on the mat from their favourite players. Defence is important for the stability of any team but what has made Kabaddi a phenomenon is the raiders who overcome those defenders. So let’s take a look at the top 5 raiders in kabaddi for the 2022 season.

The 23-year old raider from Haryana has quickly established himself as one of the elite players in his position. After making his debut as a teenager with the Mumbai franchise in 2018, Deshwal was bought by Jaipur for ₹ 96 Lakhs ahead of the 8th season. Deshwal scored 268 points in 22 matches in his debut campaign with the franchise and they retained him for the current season. As he enters his prime years, Deshwal is one of the players to watch out for this season.

The Beast from Dasuya is regarded as one of the best raiders the game has ever seen. ‘Mighty Mani’ has been present since the inception of Indian Kabaddi League and won the inaugural title with the Jaipur franchise. After the 1st season, Maninder suffered an injury and missed the next 3 seasons. He made his comeback with the Bengal franchise in 2017 and led them to their first title in 2019.

Maninder is the second most successful raider in the league’s history and has scored 1022 points in 104 matches. Bengal retained their captain for the 2022 season and have high hopes from the veteran raider to lead them to their second title.

The Wilt Chamberlain of Kabaddi, Narwal holds almost every single attacking record in the game. The ‘Dubki King’ is league’s all-time leading top scorer with 1376 points in 134 matches including 1367 raid points. After making his debut in the second season with Bengaluru, Pardeep moved to Patna franchise in 2016. He led Patna to a title in his first season with them and completed the hat-trick of titles in 2017. Narwal made Patna the most successful franchise in the league, breaking and creating new records in every match.

Narwal scored 369 points in the 5th season, which still remains the best ever performance by a player in a single campaign. The 26-year old raider from Sonipat may have seen his best years but still remains a dominant force of nature. The UP franchise paid a hefty price to secure his services for the current season but hopeful he would be worth every penny.

The ‘Hi-Flyer’ from the capital of India will go down as a legend in the history books. Sehrawat, the 3-time raid points leader in Indian Kabaddi league led the Bengaluru franchise to their first title in 2018, the 6th edition of the prestigious tournament. In the title winning campaign of 2018, Sehrawat also won the MVP award for scoring 282 raid points.

During his 7-year long career, Sehrawat has scored 1037 points in 105 matches including 987 raid points. In a match against the Haryana franchise during the 7th season, Sehrawat scored 39 points, creating the record of most points in a single match. In the 2022 player auction, he became the most expensive player in league history, when the Tamil Nadu franchise bought him for ₹ 2.26 crore. The franchise are yet to win the title and have high hopes from their marquee signing in the new season.

The 22-year old superstar hailing from Sultanpur is considered as the best raider currently in Kabaddi. His ability to consistently earn Super 10s in almost every match has earned him the nickname of ‘Naveen Express’. He created history on his debut in 2018 as he became the first player born in the 21st century to play in the Indian Kabaddi League.

In his debut season, Naveen was the leading scorer of the Delhi franchise and led them to the playoffs. The following season, he won the MVP award as he scored 303 points and guided Delhi to the finals. In his 3rd season with the team, Naveen finally established himself as the best raider in the league as he won the MVP once again and Delhi won the league for the first time in their history. Delhi franchise rests its hopes on Naveen’s able shoulders as they are set to defend their title this season.