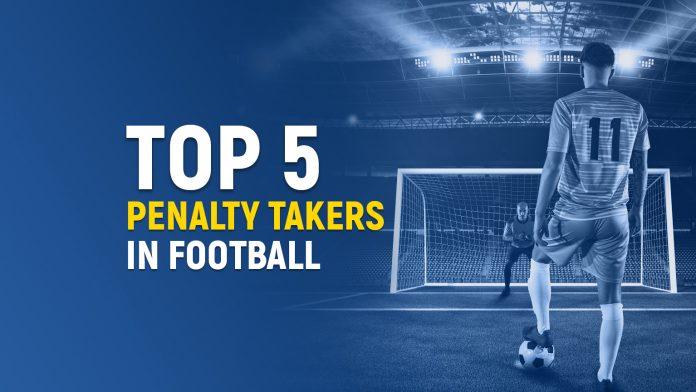 Penalty kick, the free hit from 12 yards seems to be the easiest way to score in a football match but on the contrary is the most nerve wracking moment in the game. Even the best players of the game fail to convert penalties in the most crucial stages. Penalty kicks not only test the technique of the players but also their mental strength. Today let’s take a look at the Top 5 penalty takers in football world.

Over the years, players have come up with innovative penalty techniques like the Panenka, stutter step and most recently The Bounce which is perfected by the likes of Jorginho and Bruno Fernandes.

If there is one player who can take the responsibility of taking a penalty in the presence of C. Ronaldo is none other than his compatriot, Fernandes. Bruno is known for his deceptive ‘Bounce’ penalty which is similar to the technique of Chelsea midfielder Jorginho. In the past 2 and a half years at Manchester United, Bruno has only missed 3 and converted 21 penalties. Throughout his career Bruno has an impressive conversion rate of 89.4%, making him one of the most potent penalty takers in the world.

One of the most decorated strikers of the last 10 years, Lewandowski is a goal poacher of the highest order. Popularly known as ‘Lewangoalski’ among his teammates, the Polish striker has constantly adapted and evolved a penalty technique over the years which makes him virtually unstoppable from 12 yards.  Lewandowksi has scored 71 penalties over his career with a brilliant conversion rate of 91%. According to his previous managers, Lewa’s penalty success ratio is not a fluke but a result of his dedication and hard work.

Next on our list is the Norwegian sensation E. Haaland. In a short span of time, the Nordic goal machine has already proved his mettle in Austria and Germany. Haaland is renowned for his goal scoring prowess and raw speed and strength. When it comes to penalties, you feel sorry for the goalkeepers facing the brute power of Haaland. Over his short career, Haaland has shown his composure from 12 yards with his penalties ranging from the Panenka to the stutter step. When talking about stats, Haaland has scored 27 times from the penalty spot with a conversion rate of 93.1%.

One of the most underrated strikers of this generation, Giroud has scored some of the most stunning goals we have ever seen throughout his career. The 2017 Puskas Award winner oozes calm and composure from the penalty spot. Despite not being the first choice penalty taker for the teams he has played for, Giroud has a sublime conversion rate of 95.6%. He has converted 22 penalties and his sole miss was against Coventry City in 2012-13 EFL Cup.

The surprise inclusion in our list of best penalty takers is the French striker Haller. Surprisingly he has the best penalty conversion rate out of all the players in this list. Borussia Dortmund’s number 9 has an exceptional conversion rate of 96.4% as he has scored 27 times from the spot. The only time he wasn’t able to score from 12 yards was in the 2016-17 Eredivisie Conference Play-offs against the one and only Tim Krul.

You can double up your football entertainment by playing fantasy football on MyTeam11. You can select the above mentioned players in your fantasy lineups as they can fetch you important points and help you achieve big winnings. MyTeam11 offers a variety of fantasy sports, card games & hyper casual games. So, Start Playing, Start Winning!