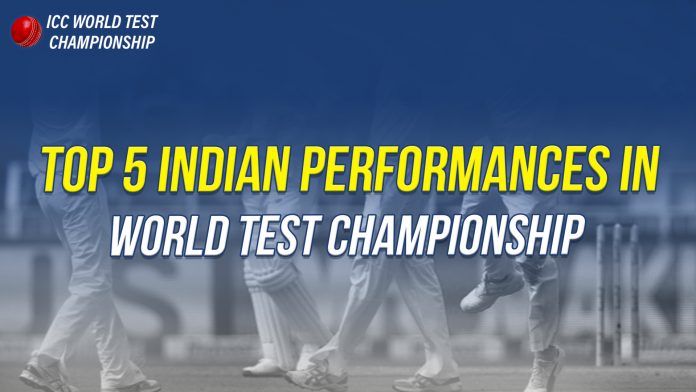 Team India is ready for another ICC Event final and they have made a habit of appearing in the knock-out stage of any ICC tournament. After beating Australia and England in their previous Test assignments, India booked their place in World Test Championship Final by topping the table. India lost only four Tests in the WTC campaign and won 5 series out of six. During this period, we witnessed some incredible performances by Indian players. They gave us a remarkable experience of Test cricket. Most of the performances came against the quality teams of England and Australia. They won Border-Gavaskar Trophy 2-1 from the toughest situation and defeated England 3-1 after pulling off a fine comeback. We have picked the top 5 Indian performances in World test Championship and we would expect to see one more in the final as well:

R Ashwin’s all-round performance in Chennai Test was one of the best by any Indian player in Test format. After a long time, we saw an Indian picking a fifer and scoring a hundred in the same match. After Rohit’s 161, India had control on the game. Ashwin bagged a 5-wicket haul in the first innings to bowl out England on 134. After taking a huge lead in the first innings, India required a top finish to give England a tough try in 4th innings. India lost their 6 wickets on 106 and Kohli was fighting alone. Ashwin added 96 runs with the skipper and later, scored his 5th Test hundred. He bagged three wickets in the final innings and England suffered their heaviest Test loss of 317 runs against India.

Rahane’s a masterclass in MCG after a disaster Adelaide show was the best captain knock of the World Test Championship. India got out on 36 and Kohli went to India amid this horror drama. Rahane got the captaincy when the Indian camp was battling through the Adelaide trauma and he had the young batch of players. After bowling out Australia on 195, Rahane scored a fabulous hundred and put a 123 runs stand with Jadeja to provide India a big lead in the first innings. Indian bowlers shined in 2nd innings too and Australia got out on 200. India won this game by 8 wickets to level the series. This one victory opened the confidence in Team India and we won the Border-Gavaskar trophy for the third successive time.

Sometimes aggressive approach can help you score easy runs on a turning track and Rohit Sharma did it the same when he scored 161 runs against England at Chepauk. India were one down in the series and to qualify for the finals, they desperately needed a win. Batting was not easy in the second Test due to the pitch’s sluggish behaviour. Rohit Sharma managed to get 161 on a tricky surface. He constructed the knock in the start and when the pitch started to favour the spin, he shifted his gears to get a good total for India in the first innings. His one knock made a big difference in the game and England suffered a heavy defeat which later opened the door for India to clinch the series and WTC Final qualification.

Bumrah picked his best Test figure in India’s first WTC assignment against West Indies. He bagged six for 27 in the first innings to demolish the entire West Indies batting lineup. With the help of Hanuma Vihari’s hundred, India posted 417 in the first innings. Bumrah was a shining star with the new ball. He became the first Indian to pick a Test hat-trick after Irfan Pathan. He scalped Darren Bravo, Brooks, and Roston Chase on successive deliveries. West Indies were bowled out on just 117 runs. Bumrah’s all wickets came against the main batsmen of West Indies. India went on to win the match by 257 runs and whitewashed the Windies side 2-0 in Tests.

Axar Patel came out as a surprise package for India and England both. After Jadeja’s injury, he was India’s 2nd spin-option after Ashwin. The Series was leveled 1-1 and India were coming off a dominating victory in the previous Test but the third Test was a pink-ball Test. India had a bad memory in the Day-Night test so England had an upper hand. Axar Patel outclassed the English side by putting a fabulous bowling show and he took India to a second Pink-Ball test victory by claiming a 10-wicket haul. He bagged a 6-wicket haul with pink-ball and set the best figure by a spinner in pink-ball Tests. His fifer in 2nd innings saw England getting all-out on 81 and India finished this game in just two days.